Armed with the new camera I got for Christmas and the promise of a warm sunny day we set off for Meadowvale Conservation Area in Mississauga.  We have previously written about much of the history of the conservation area from the perspective of the various dams and berms associated with Silverthorne’s grist mill.  We won’t cover that again here and the link will be supplied again at the end of this story.  Today we were interested in the western side of the conservation area where the Toronto Suburban Railway used to run.  The Toronto Suburban Railway operated 5 electric commuter lines, including the one that ran up Yonge Street known as the Toronto & York Radial Railway   The line to Guelph was the longest in the system at 49 miles.  Stop 47 was a small station in Meadowvale after which the line crossed the Credit River and ran through the property that would become the conservation area.

When visiting the conservation area in the 1990’s there was quaint little suspension bridge that carried the pedestrian trail across the Credit River.  It was demolished in 2009 leaving only the metal posts on the river bank.  A decaying sign in the woods announces the removal of the bridge but it isn’t really needed any longer.  To see a picture of what the bridge looked like you can follow this link to a similar bridge in Warden Woods. 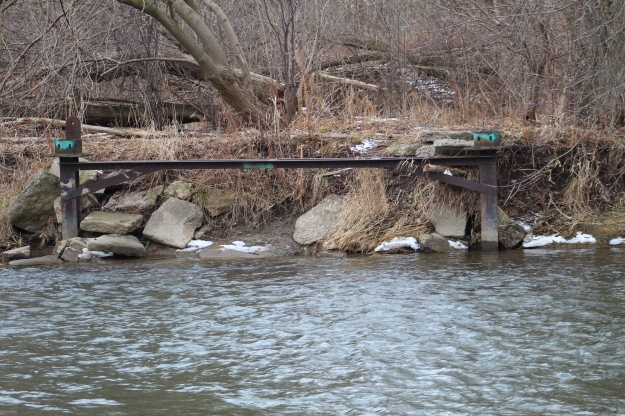 My new camera allows me to get much better shots of birds and the cardinal in the photo below was only a small red spot to the naked eye.  I think I’m going to like having it along. 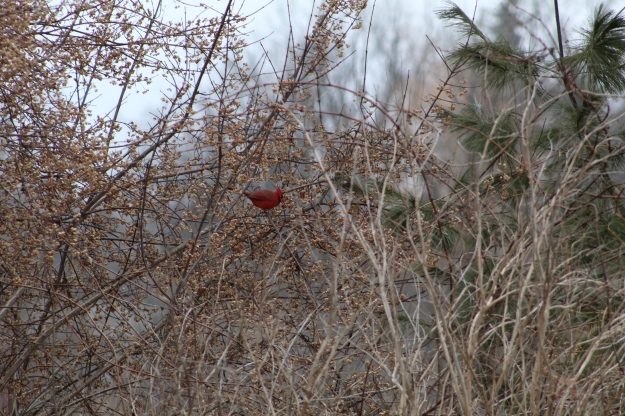 The new bridge is a little farther south and considerably longer.  It crosses an area that is likely under water when the river is flooding. 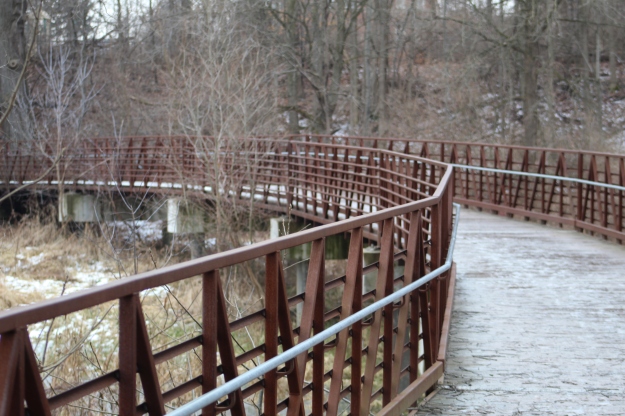 From the west end of the bridge there is a line that can be seen running horizontal through the woods.  This is the right of way for the former Toronto Suburban Railway.  The official opening of the railway came on April 14, 1917 and soon trains were running between Lambton and Guelph every two hours.  The trip lasted two and half hours and was very popular until the early 1930’s.  Rising costs, poor profits and a string of accidents coupled with a new love of the automobile led to the line being closed in August of 1931.  The tracks were removed in 1936 and in many urban areas the line has been built over with housing developments. 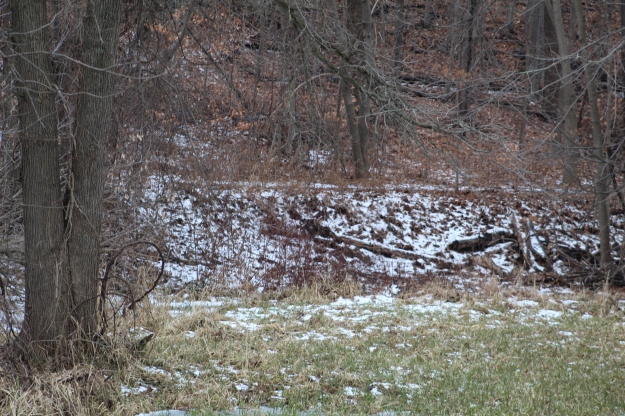 The bridge that carries Old Derry Road over the Credit River was built in 1948.  It is known as a camelback truss bridge and is part of the Meadowvale Cultural Heritage District. 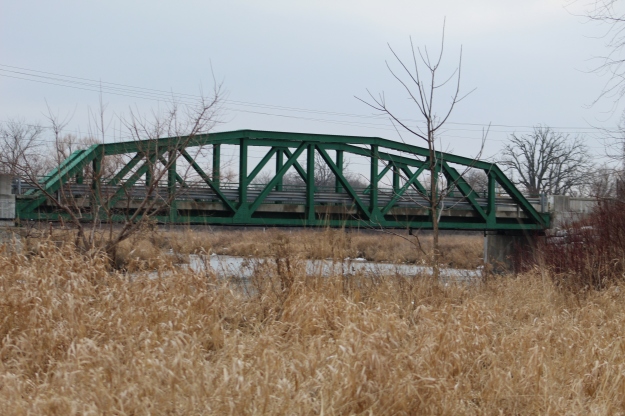 The tail race for the Silverthorne grist mill joined the river just north of the bridge.  The tail race was crossed by the radial line near the last house on Willow Lane.  Both of the abutments are crumbling after 100 years with no maintenance.  This picture was taken at the time we explored the side of the conservation area with the mill foundations in it. 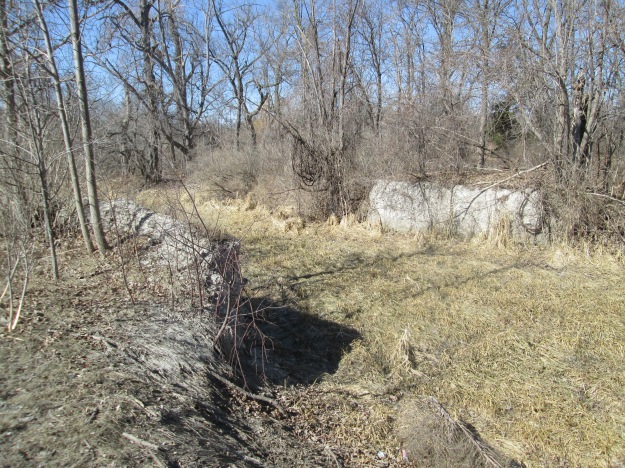 The abutments for the crossing of the Credit River are still easy to locate a short distance north of the truss bridge.  The picture below shows the south abutment as seen from across the river. 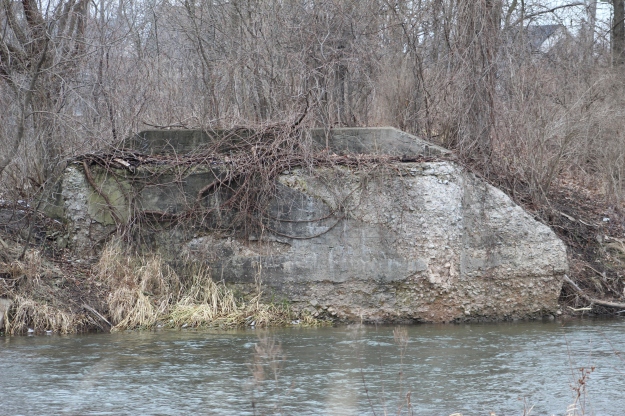 The last house on Willow Lane is undergoing a restoration.  The south abutment can be seen in the lower corner of the picture and the abutments for the crossing of the tail race are basically in the front yard.  With frequent passenger and cargo service this must have been a great place for train enthusiasts or a noisy place for anyone else. 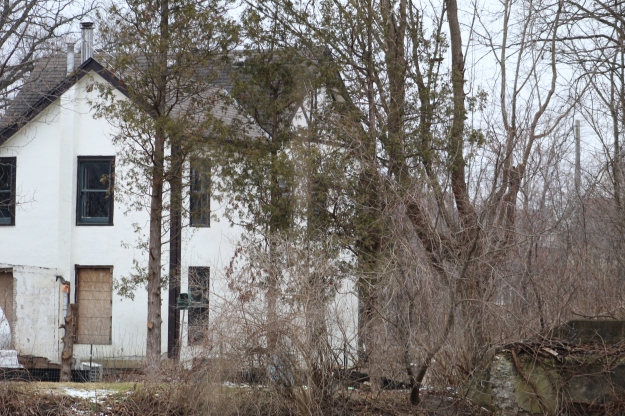 The abutment on the north side of the river has become completely overgrown with vines and must be all but hidden in the summer when the grass is full height.  Behind the vines the century old concrete is crumbling badly. 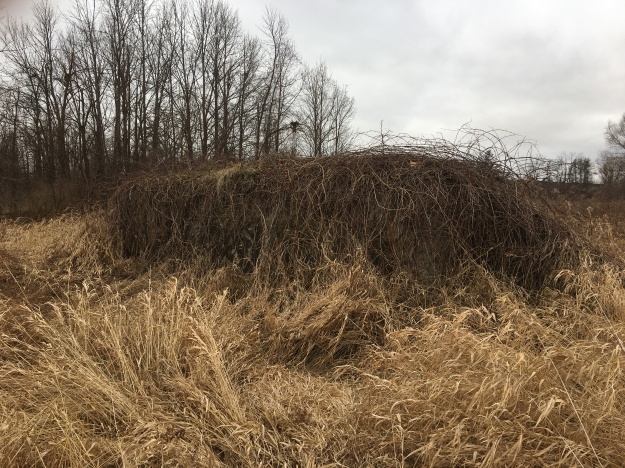 Where the radial line ran through the park there are still about ten of the old electric poles standing.  The poles supported an overhead caternary system that delivered 1500 volt DC to power the cars.  They can be picked out because of their straight lines and flat tops.  In several cases the pole has a blue slash on it as can be seen on the extreme left in the cover photo. 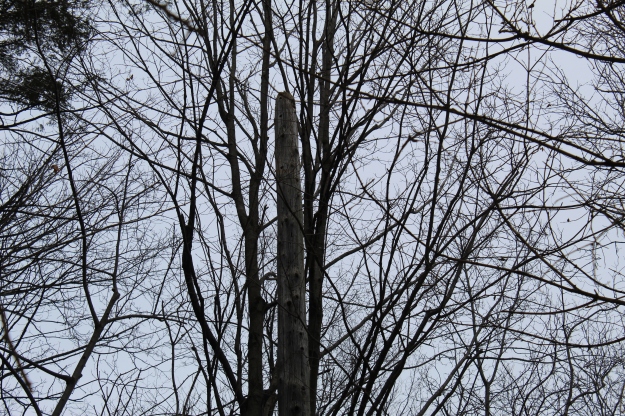 Fungus can still be found in the winter and it often adds colour and interesting patterns to what can be an otherwise drab landscape.  These turkey tail fungus entirely surrounded this old stump.

The intersection of the radial line with the active Canadian Pacific Railway appears to lie somewhere under the six lanes of the new Derry Road.  North of Derry, the Samuelson Circle Trail continues on the old right of way.  The berm can be identified in many places along here because it rises a couple feet above the surrounding land.  Culverts allowed drainage from one side of the berm to the other and one can be found in this section. 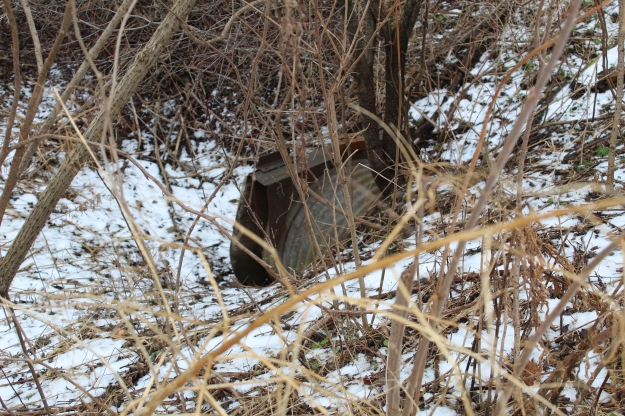 Cinnabar-red polypore can grow p to 14 centimetres in size and those pictured here are some of the larger specimens.  They grow all year and some will produce spores in the second and third years.  This fungus is not edible. 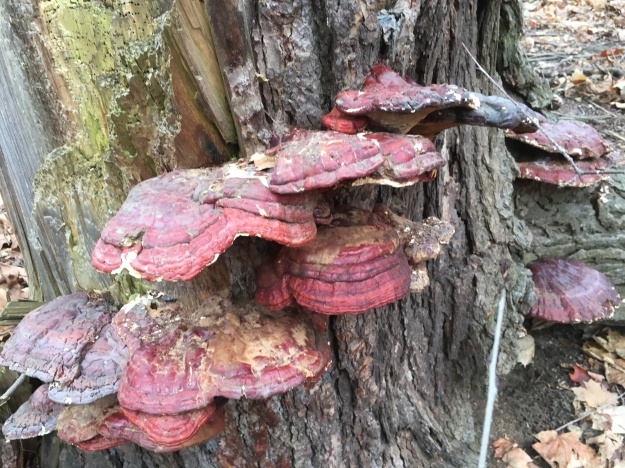 Meadowvale Conservation Area is full of interesting historical artifacts for those who like to look for such things in the area in which they are hiking.  Many of these are associated with the Silverthorne Grist Mill which we covered in detail in a previous blog. The Guelph Radial Line has left only a few clues to the former right of way as it passed through the GTA.  A ghostly set of piers that cross the old mill pond in Limehouse is one example of interesting place to visit.