The Erindale Powerhouse was opened in 1910 and operated until power was delivered from Niagara Falls in 1923.  The building was closed and sat abandoned until 1977 when it was demolished.  Today, the site is only accessible by water.  The archive photo below shows the powerhouse shortly after construction.

Hiking the GTA visited The Erindale Hydro Electric Dam in October 2014 at which time we looked at the power structures on the north side of Dundas Street.  The intake system that drew water from Lake Erindale and brought it to the powerhouse was described along with photographs.  Water was fed through a pipe under Dundas Street to the power generation buildings on the south side of town.  The pipe, or penstock, is open on the north end and led to the question “What is on the other end?”

Our Credit River at Erindale post began as an attempt to follow the river south to locate the remains of the old powerhouse.  This trip was called off due to ice on the shale but a later trial was to prove that access from the west wasn’t possible.  The east end is fenced off by the Credit Valley Golf and Country Club.  It looked like access would be from the river on a nice day, if at all.  The shale cliff pictured below leads to the golf club and is on the same side of the river as the powerhouse remains.

In 1902 Erindale Light and Power Company was formed to construct an hydro electric generating plant on the Credit River at Erindale.  It took 8 years to complete the construction which included a tunnel under Dundas Street.   A natural crook in the river was used to bring the water through the shortest possible tunnel.  The powerhouse was built near the end of Proudfoot Street.  Erindale and New Toronto got their power from the plant until 1923 when supply came to the area from Niagara Falls.  The 1960 aerial photograph below shows the power generating station 37 years after it went out of service.

A small ravine is cut through the shale and initially it looked like a good possibility to be the tail race from the power station.  It is laid from top to bottom with old pipes that in many places are rusted through. 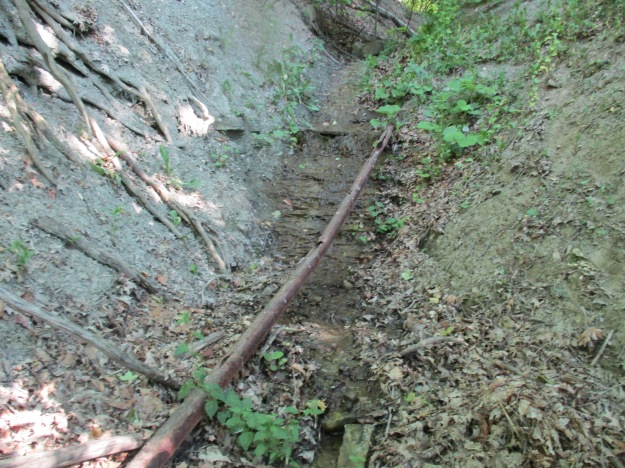 Buried in the hillside are the remains of a pump dated July 19, 1921.  This 95 year old pump was manufactured by F. E. Meyers of Ashland Ohio who were a major manufacturer of farm equipment.  Founded in 1870 they invented the double action pump which could deliver a steady stream instead of just spurts of liquid.  In 1910 they created the pump and spray system that allowed the Panama Canal zone to be sprayed for mosquitos.  This saved thousands of people from getting malaria and allowed construction of the canal to be completed.  The pumping system and pipes run directly toward the Credit Valley Golf and Country Club.  The first 6 holes of which were developed in 1930 for W. D. Ross who was Lieutenant Governor of Ontario at the time.  In 1934 the course was leased from Ross and opened to the public.  Since then it has been expanded several times including 5 holes in 1954 on the west side of the river to bring it up to a full 18 holes.  The pumping system in the ravine predates the golf course by a decade but is contemporary with the final days of the electrical powerhouse operation in the valley.  It supplied water to the orchards that formerly stood on the golf course property.  A similar pumping system is located on Loyalist Creek as seen in the post Erindale Orchards.

By 1916 the Erindale Powerhouse was in financial trouble and was bought out by the Hydro-Electric Power Commission of Ontario.  They continued to operate it until 1923 when power from Niagara Falls rendered it obsolete.  Demolished nearly 40 years ago, the woods are quickly taking over the site.

There are pieces of old walls and plenty of steel left along the ravine side.  The cover photo shows one of the steel plates from the old structure. 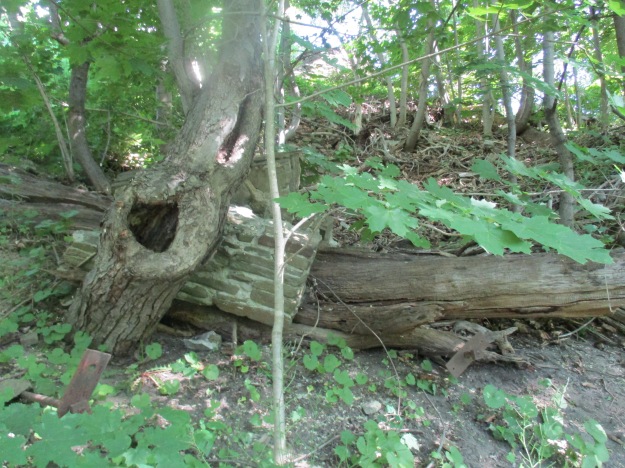 The old access road still runs along the side of the embankment.  It appears to be still maintained as there are no fallen branches on it and the tire tracks are free of plant growth.  There is a large open area at the bottom of the roadway that is being used as an amazing back yard by a home at the top of the ravine. 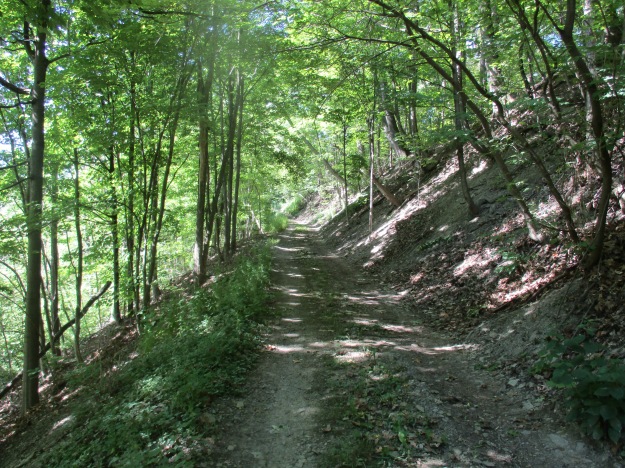 Purple Flowering Raspberry is a member of the rose family and it blooms from early in the spring until early fall.  It is often grown for decoration because of it’s long season and bright flowers.  The fruit is made of many drupelets and is furry compared to a raspberry.  The berry is a little tart to the taste but can be eaten and is part of the diet of squirrels and birds. 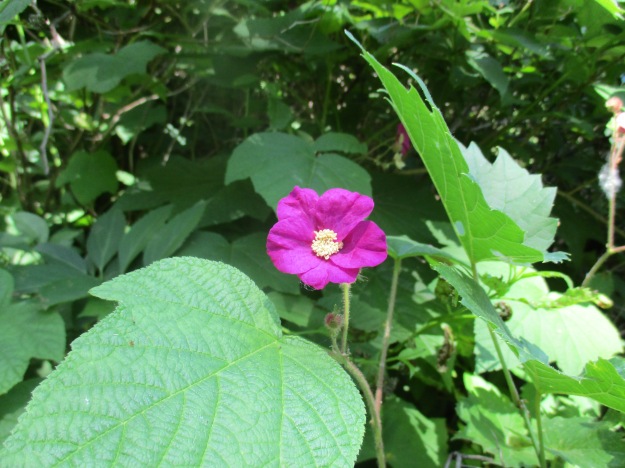 At the top of the access road are the old stone gate posts that marked the entrance to the facility.  Also located here is the “No Trespassing” sign that marked the beginning of the return journey. 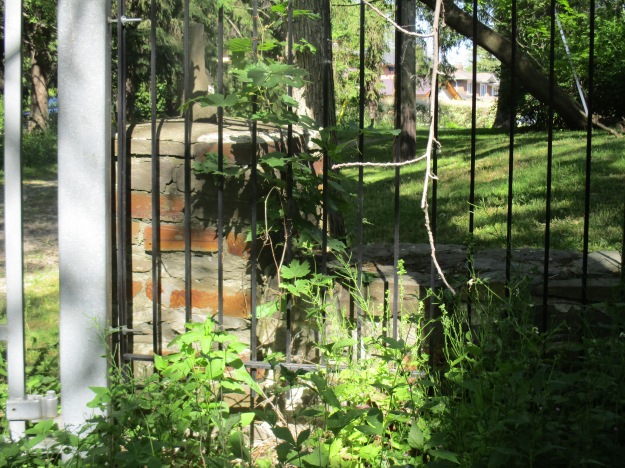 This tree has grown around these two stones and lifted them two feet off the ground.  They’ll continue to rise as the tree grows until it eventually falls and rots leaving them a couple of feet away from where they started.  It’s a good thing they have all the time in the world because it’ll take them forever to walk into town at this pace.

This was an interesting trip but there is very little left of the old powerhouse.