Having begun in the lower parking lot off of Burnhamthorpe we had made our way through the Bird property and arrived at the double row of pine trees that mark an old driveway.

In 1833 Peter McDougall acquired 200 acres of land as  a crown grant.  The property changed owners a few times until 150 acres of it was purchased in 1913 by W. R. Percy and Ida Parker. In 1914 they built a stone cottage on the top of the hill and used it in the summer to get away from their home in Toronto.  The lane way leads up the side of the ravine to the cottage.

Climbing the lane you come to the stone cottage.  It was built on the foundations of a previous building near an existing barn.  In the 1930’s Ida Parker sold the lower parcel of land, including the stone cottage, to her daughter Margaret MacEwan. The cottage was expanded in the 1950’s with the intention of matching the style of the earlier piece.  It was quite well done and the part of the cottage below that looked like the older was in fact the newer part.  I have read in one place that this may be the pickle factory put to a new use. 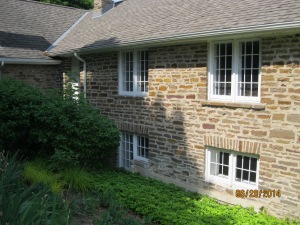 The barn dates to 1865 and is a remnant of the early farming on the property.  Although it has been re-clad with new exterior boards, the interior still contains the original timber frame.

In 1918 Percy commissioned the building of a new home on the property to be called Riverwood.  It was built of stone which was hauled up from the river on the lane way past the stone cottage. The main part of the building, behind the grand fireplace, was a large party room.  Several Canadian Prime Ministers are said to have frequented the home. William Lyon Mackenzie King visited  here often during his 22 years as Prime Minister.  This was also one of the first homes in Toronto Township to have electricity.  Along the front driveway sits an old wagon, featured in the cover shot. 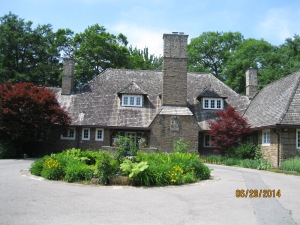 This stone cistern was originally used to hold water that was pumped up from the Credit River.

Riverwood sits on a point of land between two small ravines.  Chappell ravine on the north side and on the south, MacEwan ravine.  When the house was built a swimming pool was built on the MacEwan ravine.  The sides and front of the pool are lined with concrete and a set of stairs is built into the south corner.  When it was built it was the first swimming pool in what is now the city of Mississauga.  It was cold and hard to keep clean so it was eventually abandoned and a new pool was built on the front lawn.

The pool is accessible by a stone walkway from the back yard of the house.  The walkway passes in front of the pool and leads to the tennis court beyond.  In the 1920’s it was very fashionable to have your own tennis court and no estate was complete without one.  It is said that Prime Minister Pierre Elliot Trudeau played tennis here.  Careful examination can still reveal some of the white lines on the court surface.

If you return to the main trail near the pine trees that mark the old lane way you can make your way further north in the park.  Soon you will come to this old set of stone stairs. Even with some missing, there is still over 100 steps on the hill side.  These will take you back up to the back yard of Riverwood. 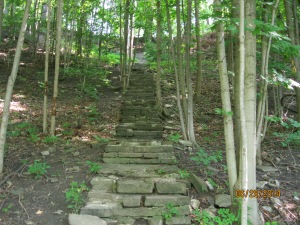 Percy lost his fortune in the stock market crash of 1929 and died in 1931.  Ida Parker struggled after this and sold off the property in three pieces.  She sold the southern portion to her daughter in the late 1930’s.  In the 1940’s she sold the northern farm lot to John and Theodosia Zaichuk.  (We’ll visit that property in Riverwood part 3).  Finally she sold Riverwood itself to Hyliard Chappell in 1954.  Chappell was the federal Liberal MP from 1968 to 1972, serving in Trudeau’s government.  It was likely during this time that Trudeau visited what was then known as Chappell House.

A summary of our 15 top hikes is presented here.