East Point Park is sandwiched between a water and a sewage treatment plant.  The park has an upper meadow, wetlands, a segment of the Scarborough Bluffs and a lengthy beach.  There is a parking lot at the end of Beechgrove Drive where there is free parking.

At 55 acres this is one of Toronto’s largest waterfront parks.  This post is the fourth one by Hiking the GTA that covers parts of the Scarborough Bluffs.  To avoid a lot of repetition a link will be provided to other posts that contain further details.  The park itself is on the former land grant of William Bennett. John Bennett was a 26 year old farmer in Scarborough township in 1890 when he married Eunice Davis. He carried on with the family farm.  In the 1950’s Scarborough was transformed from farmland to urban centre and this piece of land remained undeveloped.  A water filtration plant named F. J. Horgan Filtration Plant was built on the west end in 1979 and the Highland Creek Sewage Plant was built on the east end in 1956.  Fom the parking area the trail leads past a pond and wetland then east along the bluffs. 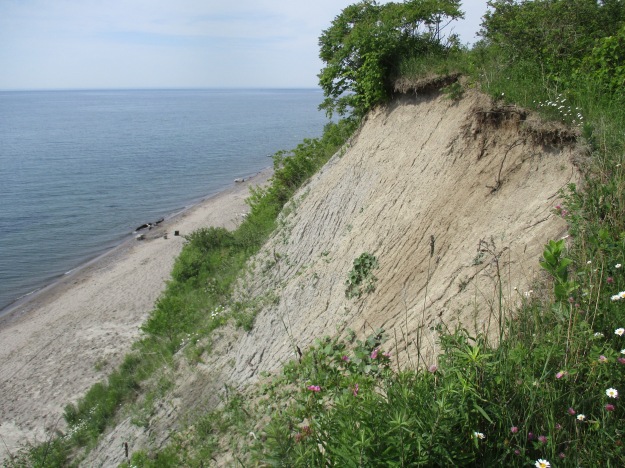 Dog strangling vine has become a real problem in many of our hiking areas.  The plant is related to the milkweed plant.  It is actually two plants who are related and are given the same common name.  Black Swallowwort and Pale Swallowwart are native to Eurasia and were brought to the Northern United States in the mid-1800’s for use in gardens.  Like many garden plants they escape and this one can produce up to 28,000 seeds per square metre infested.  In the fall the seed pods pop and the seeds are spread by wind and animal.  Hikers and cyclists need to be diligent at this time to be sure you don’t carry seeds on your clothing or especially in your bike tires.  The dense mats of tangled vines choke out native vegetation and prevent forest regeneration.  Since they cover vast areas and are not eaten by deer they put added pressure on other sources of food.

Milkweed is related to the Dog Strangling Vine above but we are much happier to see it.  Environmentalists like David Suzuki encourage people to plant this one in their gardens.  Why should two related plants have such different attitudes when it comes to gardens? It has to do with the Monarch Butterfly.  The butterfly lays it’s eggs on the milkweed and it is the only plant on which they can complete their life cycle.  Monarch’s have also been seen laying eggs on dog strangling vines.  Unfortunately, the larvae cannot eat the plant and they all die off.  The milkweed in the picture below is in flower but is surrounded by it’s invasive cousin.  Chances are that it will be strangled and die off itself.

The Monarch butterfly pictured below was just drying it’s wings after recently hatching.  There are four generations of monarchs born each year in Ontario.  This is the second generation this season and this butterfly will live between 2 and 6 weeks if it avoids being eaten first.  It’s offspring will be born in July or August and will also live up to 6 weeks.  It’s grandchildren will be born in September or October and they will live for six to eight months.  That will be the generation that flies to Mexico and returns next spring to start the cycle over again.  East Point Park is a staging area for monarchs heading south but the invasion of dog strangling vines may put this at risk. 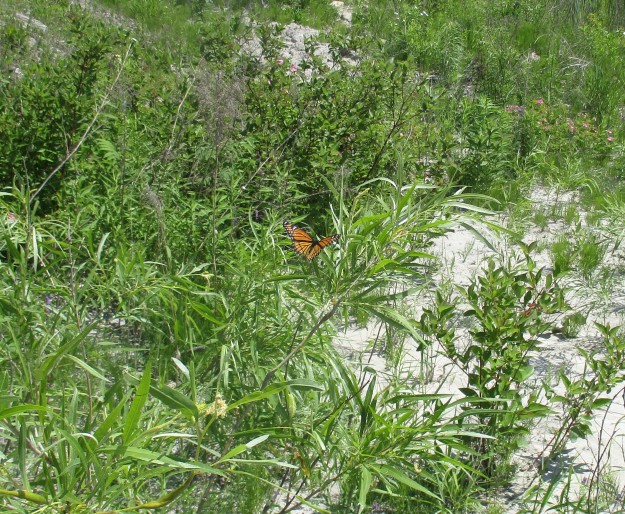 The trail continues west along the top of the bluffs but is fenced to keep you a safe distance from the edge.  Older portions of the trail run right along the edge of the bluffs but are quite unsafe because erosion as detailed in our Cathedral Bluffs post has undercut the cliff edge and the sand could collapse at any time. Unfortunately, some of the best shots require getting closer to the edge.  Toward the west end of the park there is a small, informal trail that leads down the bluffs.  It is hard packed and has good foot holds but looks like it could be a hazard when wet or icy.  Using this trail you can descend to the beach.  This will let you turn the walk into a loop so you don’t have to double back.

When you reach the bottom of the path you’ll find sandy beach running off in both directions.  Be careful which one you choose because turning to your right and heading west will bring you to an unposted nude beach.

Just to your right at the bottom of the bluffs is a large shelter constructed out of branches lashed together.  One section has been covered with a tarp to provide shelter when the rain begins. 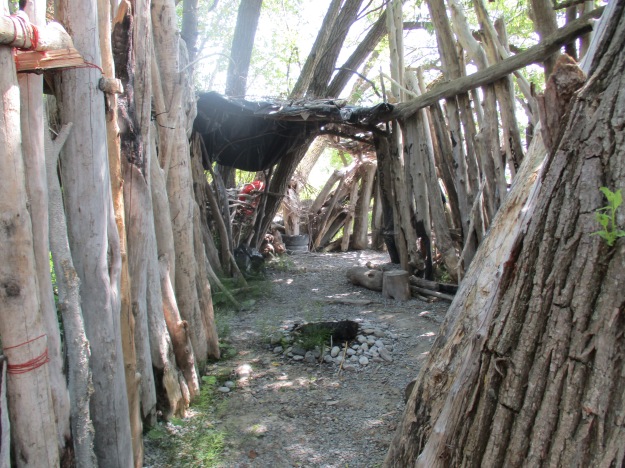 This collapsing tower of sand is the same one seen from the top of the bluffs in the cover photo. 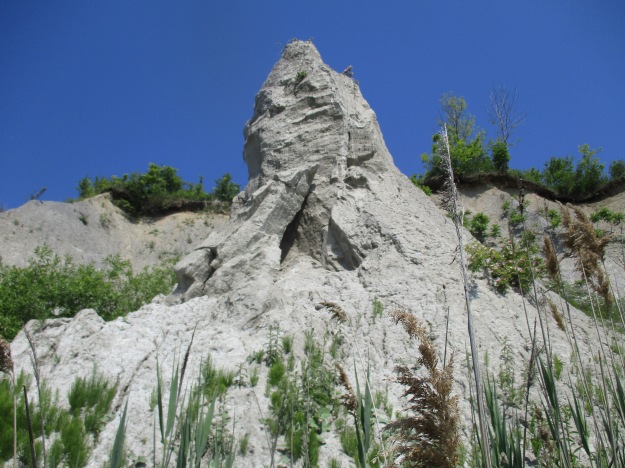 In several places there are large boulders in the sand part way down the embankment.  These are inconsistent with the formation of the sand bluffs as described in Sand Castles.  Sand laid down in an inland sea shouldn’t have boulders in it.  These boulders are formally referred to as glacial erratic.  Erratics are stones of various sizes that are different in composition from the stone in the area in which they are found.  These stones have been picked up by glaciers and are often carried great distances before they are deposited by retreating ice.  This is commonly seen in river beds which flow through shale but contain granite boulders.  The boulders along the bluffs are only found in the soil layer on top of the sand and they make their way to the bottom as the sand erodes away underneath of them.  There are plenty of these boulders of various sizes along the beach as seen in the picture below.

Above the sand is a layer of soil which is full of various plants that grow in the meadows of the formerly cleared fields that were once settlers land grants.  The roots of these plants hold the soil together and provide a little mat that sticks out over the edge of the bluffs where the sand has eroded away beneath it.  This has become home to a colony of swallows whose nesting holes dot the edge of the bluffs. 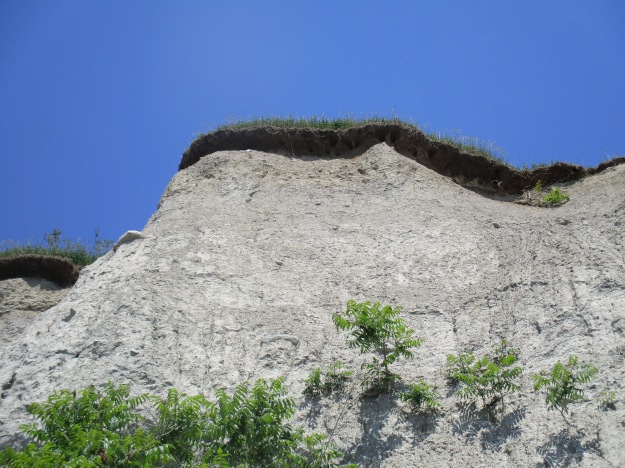 Following the beach will bring you back to where there is a pathway that leads back up through a small ravine to the meadow at the top of the hill.

East Point park marks the eastern end of the Scarborough Bluffs which run from Highland Creek to Victoria Park Avenue, a span of 15 kilometers.