It was 23 degrees and sunny without a cloud in the sky.  We parked along the side of the Credit River just before Dominion Road.  The cover photo shows the area of the Forks of the Credit trestle around 1900.  We set out to investigate the remnants of several elements of this picture. We visited the trestle, the kilns where the chimney is and the white rock face on the cliff wall above and to the left of the kiln known as The Devil’s Pulpit.

This area was surveyed in 1819-1820 with the earliest settlement being at the site of present day Belfountain at the top of the escarpment.  With the coming of the Credit Valley Railway (CVR) the area of the Forks of the Credit became an industrial hub focused on the quarry industry.

At its peak Forks of the Credit had 33 houses, a store, a hotel and a brick school with a Mechanic’s Institute.  Mechanic’s Institutes were places where adults could access the use of books.  Often funded by industrialists with the intention of having better access to educated employees these preceded and often turned into public libraries.  The school still stands on Chisholme Street which is roughly where the third line would have passed had the hill not been so steep.  The picture below shows the date stone indicating that this was Caledon School Section 19 and it was built in 1884.  The date stone also reads Pro Bono Publico or For The Public Good.

Medina or Whirlpool sandstone was noted in an 1863 geological survey however there was no easy way to get it from quarry to potential market.  The CVR was established in 1872 and one of the key objectives in it’s charter was to provide a link between the aggregate resources in the Credit Valley and the markets in Toronto and Hamilton.  It came through the area in 1879 and ignited an industry that would prosper for 20 years.  The CVR built a 1,146 foot wooden trestle, 85 feet high to cross the valley.  At the time it was the longest curved trestle in Ontario but safety concerns led to much of it being filled in by dumping gravel through the trestle.  The archive photo below shows the trestle before being filled in with the Devil’s Pulpit in the background.  Compare this with the cover photo after infilling. 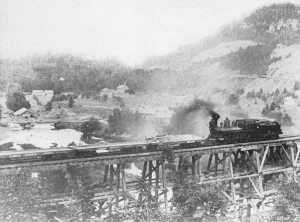 Only three spans over the Credit River and the Forks of the Credit Road remain open with the balance of the old wooden structure now hidden below a berm of gravel.

The original wooden trestle was replaced with concrete support and three steel spans in the early 1900’s. The centre span has steel truss work as can be seen in the picture below, taken from the south abutment, and is also seen in the cover photo. 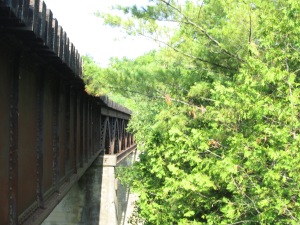 Portions of the original round wood trestle still support the tracks on both abutments.

Vipers Bugloss or Blueweed grows in barren places and we found a few plants growing in the rocks beside the trestle.  The leaves, especially those closest to the root, can be infused in a tea. This tea is reported to alleviate headaches, fevers and inflammatory pains.  it is also said to give a general feeling of well being, relieving melancholy. 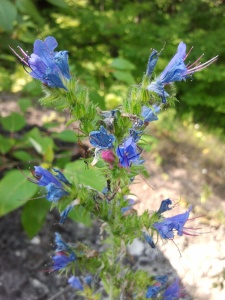 Between the trestle and the top of Chisholme street a siding used to run from the main CVR line to the Hoffman lime kilns.  Twelve draw kilns were built in a ring 30 metres long and 15 metres wide.  The whole set-up was enclosed in a sheltering building.  Several quarries operated in the Forks of the Credit in the late 1800’s supplying cut stone for buildings such as the Legislative Assembly of Ontario building at Queens Park in Toronto.  A layer of Dolostone covered this sandstone and Hoffman built the lime kilns in 1896 to take advantage of this resource.  Moss covers the walls of the pathway between the stone kilns. 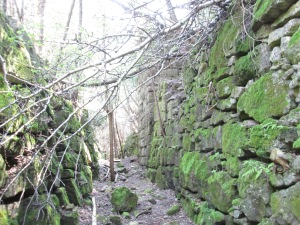 Each of the 12 draw kilns were loaded and burned individually and with separate heat control. The kilns were started in a sequence such that there were always some being loaded, some in mid cycle and some being emptied of cooled down lime. The picture below shows inside of one kilns with it’s fire brick lining.  Similar kilns can be found at Limehouse.

The chimney stood 30 metres tall to exhaust the smoke and heat from the kilns but only the lower few metres remain standing. 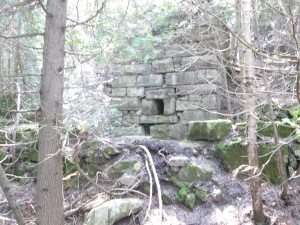 The Bruce Trail works its way up the side of the escarpment past discarded boulders and small run off streams.  After climbing a little farther you come to an open quarry face of what was known as The Forks Quarries and now is referred to as The Devil’s Pulpit.

As you reach the upper portion of the 100 meter climb a series of stone and wooden stairs have been provided.  A steel cable is anchored into the rocks for added safety.

The view from atop the Devil’s Pulpit is quite spectacular at any time of the year but especially so in the fall when the leaves are changing.  A small white strip near the centre of the picture below, and about a third of the way up, is the railway and is almost lost in the valley below but gives perspective to the distance that can be seen from up here.  It can be seen when the picture is expanded.

The climb to the top of the escarpment is a lot of work but it is well worth it.  The Bruce Trail continues out along the right of way for the third line but we went back down the hill.  The descent is easier and quicker than the ascent but be sure to watch your footing.  You don’t want to get back down too quickly!