In 1826 The Taylor Family moved to the property that today we know as Crother’s Woods. Beechwood Drive is the road that led to the homestead they built and for decades was one of only a few places where you could travel across the Don Valley. Parshall Terry owned the property that became known as Terry’s Field and was the next property north of the Taylor property.  To check out this 11-hectare area I took advantage of free parking on Beechwood Drive just off of O’Connor Drive.

Around 1900 the Taylor family purchased Terry’s Field to make bricks from the clay that had been located there.  They already had an extensive industrial empire to which they kept adding.  The colony was offering a bounty for the first industrialist to open a paper mill and the mill at Todmorden had opened although it did not win the title.  That went to the paper mill in Crook’s Hollow.  The Taylor Paper Mills were a success and they eventually operated three of them.  The one at The Forks of The Don was the most northerly of the trio with Todmorden being at the south.  The Taylors opened Sun Valley Bricks which operated in the valley into the 1930’s.  This was in addition to the Don Valley Brick Works which they managed just south of Todmorden.  Later Domtar opened facilities here that left the land contaminated when it closed in the 1980’s.  After removing truckloads of soil and most of the buildings the land was deemed safe for use again.  Toronto Police Services is using the only remaining facility to train their canine units.

Near the site of the old Taylor house stands the crumbling remains of an old kiln.  This likely predates anything else remaining on the site.  The cover photo shows the kiln from a little different angle.  As can be seen from the picture below the kiln is crumbling on one corner and it is surprising that the city isn’t taking steps to keep people off of the kiln.  There is also a couple of trees growing on top of the structure.  I believe that it should be restored and given a proper interpretive sign as it may be the best example of an old kiln in the city.

The river shows many signs of its past usage including a narrow pond which is likely the remains of a 19th-century mill raceway.  Outfalls line the river including two that come directly from the North Toronto Sewage Treatment Plant which was opened on August 1, 1929.  There is also evidence in the river of a past dam, the crib can be seen below the water in this picture.

Beechwood Avenue is now closed to through traffic but formerly curved to meet the CNR tracks just before it reaches the river.  The Lower Don Recreational Trail runs parallel to this section of roadway.  Directly in front lies the Beechwood Wetlands and to the right, Cottonwood Flats where the city dumped snow until 2004.  Sun Valley, former home to Sun Brick Company and the Sun Valley Land Fill lies beyond in Crothers Woods. 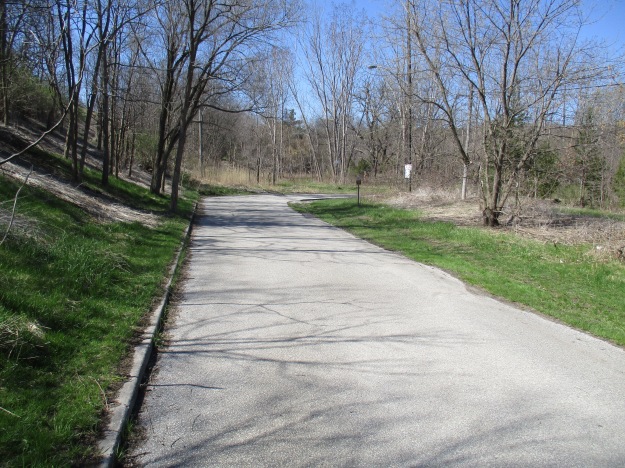 Beechwood wetlands was built in 2002 and 2003 in a joint effort by the Task Force To Bring Back The Don, Toronto Region Conservation Authority, Toronto City Parks and several others.  They  used heavy equipment to recreate the landscape and eliminate the damage done by years of use as an industrial site.  Volunteers planted 6500 native trees, shrubs and wetland plants and maintained them twice a week for the following year to ensure they got off to a good start.  The wetlands are now home to frogs, snapping turtles and various wetland birds and are considered one of Toronto’s most successful restoration projects.

The Red Admiral butterfly makes a migration north each spring to recolonize most of North America.  It will have two cycles per year, one in March which spends the summer in Ontario.  A second brood is hatched in October that flies south to spend the winter months in south Texas.  Red Admirals have a red/orange band that encircles both wings and prominent white spots on the front of each forewing.

The Lower Don River has cut through layers of shale that can be seen near the waterline and perhaps this is what was being burned down in the kiln.

After the buildings were demolished piles of construction rubble were dumped along the side of the river.  These piles in many places have become habitat for the various species of wildlife that inhabits the parkland.  Throughout the concrete slabs can be seen the wrought iron reinforcing bars that were used prior to tied rebar used today.

The Canadian National Railway line cuts through the property and the winding nature of the Don River required the railway to build two bridges.  The bridges are nearly identical in construction and the railway is still active.  The former Beechwood Road crossing has signals and caution should be exercised when making your way from the Cottonwood Flats into Crother’s Woods on the other side.

The other side of the Don River can be accessed via a footbridge just beyond the train bridge.  Therefore, there is no excuse for crossing the river on the rail bridge like I observed several people doing.  There’s a sign by the rail bridge that gives a number to call if you are feeling suicidal.  I wonder if they too saw someone taking their bike across?  A mountain bike park has been set up along the trail near the rail bridge. There’s even a small place where you can step out of the weather for a moment.

Sun Valley and Crothers Woods still have areas that I haven’t explored.  Perhaps one day…

Crothers Woods has at least three access points, each with parking.  There is one parking lot at the Don Valley Mountain Bike Trailhead on Pottery Road (map link at end) just before the bow-string bridge over the Don River.  This parking lot sits on the old road allowance for Pottery Road, a section of which was abandoned when the Bayview Extension was built in 1959.  From the trailhead, the path leads north following the side of Bayview Avenue until it reaches the northern tip of the park where there are a couple of parking spots.  To the right along this trail is an area known as Sun Valley.  It was home to a small brick making company called The Sun Brick Company which operated until the late 1930’s.  The property had been home to the Taylor Family who built their homestead here in 1826.  The family owned the Don Valley Brick Works and Todmorden Mills where they ran one of their three paper mills. When the clay for the bricks was nearly exhausted the town of Leaside purchased the pit for a landfill.  Over the next few decades, they dumped garbage up to 25 metres deep in the pit.  It has now been capped with clean fill and is being restored as a meadow at this time.  The Taylor Family home has been moved to Todmorden Mills where it is being preserved.  The picture below shows the home, that once stood in today’s Crothers Woods, as it appeared in the summer of 2014.

Following the trail into the woods leads to a slight diversion, the abandoned CPR tracks. The first train to roll across the tracks here was a freight train in 1891.  That train continued south along the Don Valley and into downtown Toronto.  Along the way, it passed over the Half-Mile bridge.   The first good snowfall of the season sits largely undisturbed on the tracks in the picture below. Due to the fact that the snow had fallen without much drifting the rails and ties can be clearly seen in spite of the fact that there is about a foot of fresh snow.  This is one of the few local abandoned railways that still has the rails and ties intact.  It is likely that Metrolinx, who owns the railway corridor, will incorporate it into some future passenger line.

An active set of tracks belonging to Canadian National Railway runs parallel to the abandoned CPR ones as the Don Valley made a suitable access to the city.  Two freight trains passed along the other tracks while the lower ones were being briefly explored.

Crothers Woods is one of the most bike friendly parks in the city.  Bikers are encouraged to use the trails although pedestrians still have the right-of-way. Winter biking has its challenges and a bike is normally fitted out especially for the season.  Fat tires and wider frames are matched with enclosed gears that prevent freeze up.  The tires may be inflated to as low as 5 pounds pressure.  A group of winter bike enthusiasts was using the park to get some exercise and enjoy their custom cycles.    It is always nice to see others who find a way to enjoy the winter weather.

Crothers Caterpillar had a manufacturing plant in Crothers Woods until 1979.  Built by George W. Crothers it produced heavy equipment, primarily for the mining industry.  The plant backed onto the railway and the factory buildings on the site were removed by 1991. The site has recently been partially repurposed as a Loblaws store and parking lot.  There is a trail head here as well that was the starting site of the group of fatbikes we had seen earlier.  There is also lots of parking available in the back of the parking lot near the trailhead.

The loading ramp from the former Crothers Caterpillar plant still stands along the abandoned railway track.

A lone hydro pole stands in the woods where it once was part of the Crothers Caterpillar plant.  What was an open field 30 years ago has grown back in quite well!

In 1929 the city built the North Toronto Sewage Treatment Plant on the edge of Crothers Woods.  It processes the effluent from North Toronto and Leaside.  Personal experience indicated that the sewage system covers in North Toronto are mainly dated 1928 with a few from 1929.  The cover photo shows another view of the treatment plant. 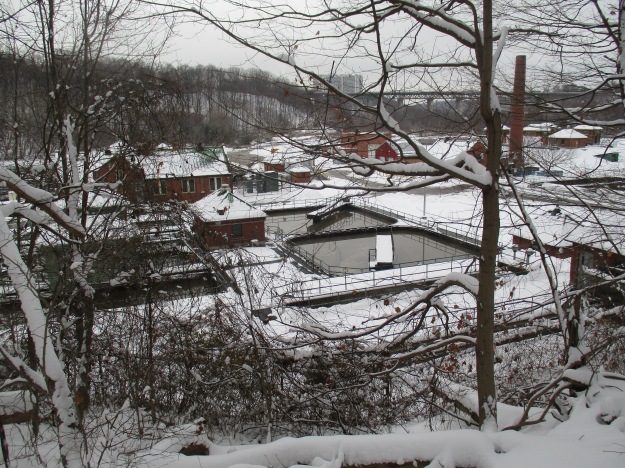 Crothers Woods was a farm for about 100 years before it spent the next century as an industrial site.  Today it still retains some areas of Carolinian Forest consisting of beech, maple and oak.  There are also a few butternut trees which are locally rare.  Crothers Woods has been designated as an Environmentally Sensitive Area (ESA) because it is a home to some rare undergrowth plants.  It is also a good place to see common spring flowers like trout lilies and trilliums.  The east ravine wall contains some climax forest which is the historical normal vegetation that exists in a stable condition in this part of the country.  New growth forest has taken over much of the rest of the 52-hectare park. 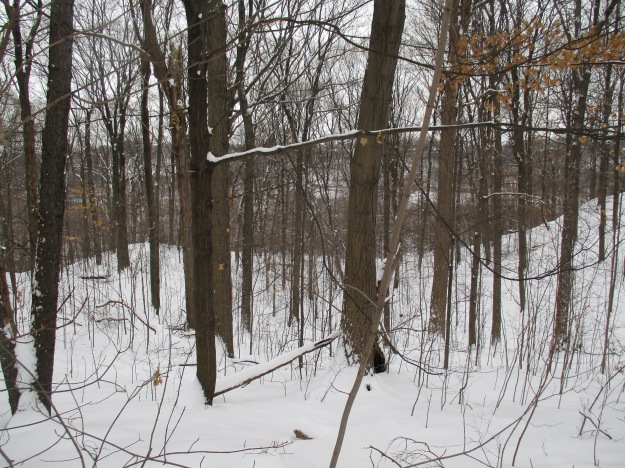 An extensive set of stairs leads from the corner of Redwood Road and Millway Road down to the sewage plant.

There are plenty of remnants from old land usage in the ravine.  A lengthy penstock runs down the hill behind the treatment plant while these concrete structures stand a little farther along.  They say that old relics from the Crothers Caterpillar plant are still dug up on occasion in the woods.

Crothers Woods also includes the Beechgrove Wetland which is a successful restoration project.  The wetlands, Sun Valley and an abandoned road await a visit in the spring when the wetlands will be teeming with life.