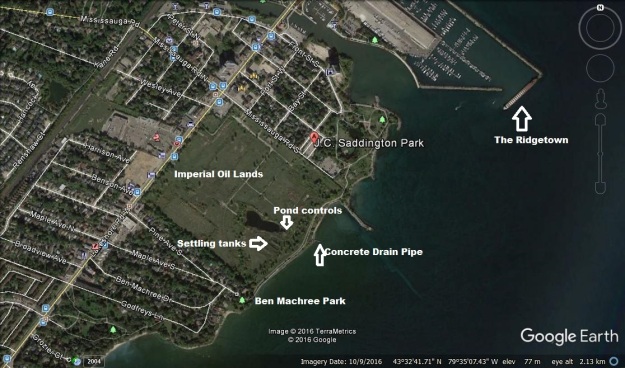 Thomas Nightingale opened a brickyard on the west side of the Credit River in the 1880’s. The addition of a stone crusher increased production to the point that by 1900 there wasn’t enough local labour to run the brickyards.  A series of bunkhouses were constructed and Italian workers were brought in to meet the demand.  The archive photo below shows the Port Credit Brickyards in their prime. 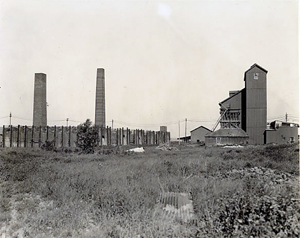 After the First World War, the clay was becoming exhausted and the yards started operating at a loss. By 1929 the brickyards were closed.  This brick was found on the property of the old brickyards where it was made, perhaps over 100 years ago. 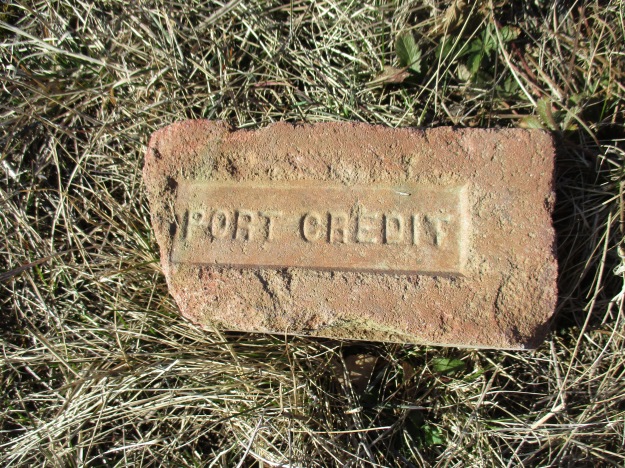 In 1933 the Lloyd Refining Company purchased part of the property to build a modern refinery capable of producing 1,500 barrels a day.  The refinery changed hands a few times including 1937 and 1946.  In 1955 the property was purchased by Texaco and their Canadian subsidiary McColl-Frontenac began operating the refinery.  In 1959 the name was changed to Texaco Canada Ltd.  Petrochemicals were produced here beginning in 1978 but by 1985 it was starting to be decommissioned.  The oil tank farm was removed first and by 1987 it was fully closed.  Only one small building remains on site along with a storage shed. 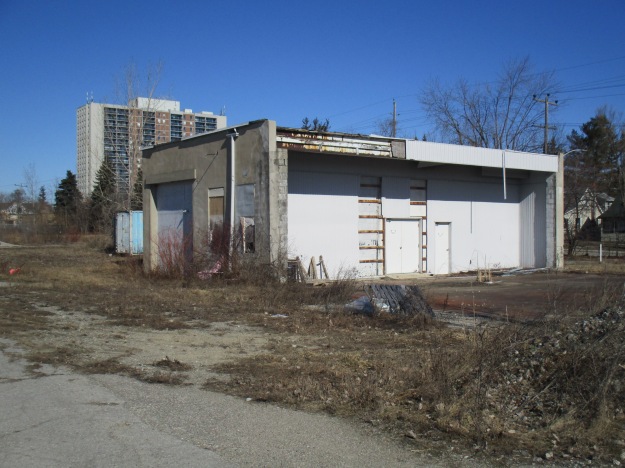 The property has sat vacant for a couple of decades now and is highly contaminated from its years as an oil refinery.  As of March 2017, Imperial Oil is selling the property to a developer who plans to develop a waterfront park, mid-rise condos and affordable housing on the site.  Today the property is home to a large selection of wildlife.  Coyote scat is everywhere and rabbits and squirrels provide food for them as well as the hawks.  A white tailed deer was casually feeding just inside the fence from Mississauga Road. 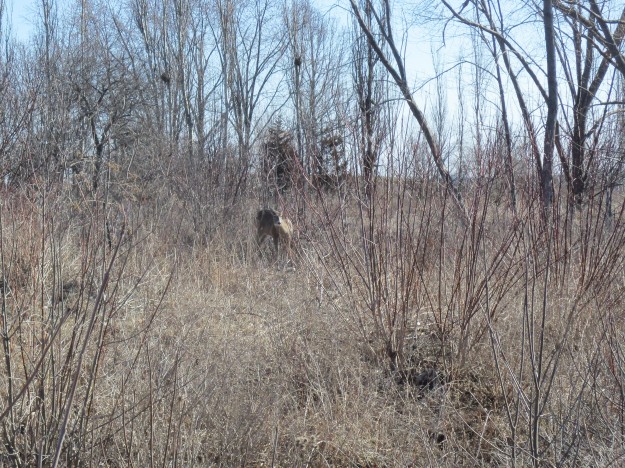 Roadways and concrete pads mark the locations of the former tanks and buildings.  The property is marked as no trespassing because of the numerous hazards that exist throughout.  This story is presented to preserve the site as it exists at this moment in time.  Soon it will change forever and this chapter will be lost.  Choosing to explore here is solely your responsibility.  A large man-made pond covers a section of the property and may feature in redevelopment plans for a central park within the community.  The pond is currently full of pipes that have started to break apart over the years of abandonment. 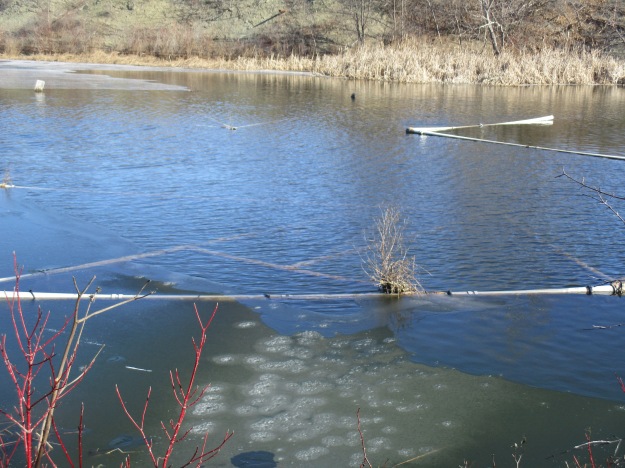 The lower corner of the pond still has the dam and flood control devices intact.  Two sluice gates could be opened by turning handwheels.  The cover photo shows a closer look at the mechanics of the system. 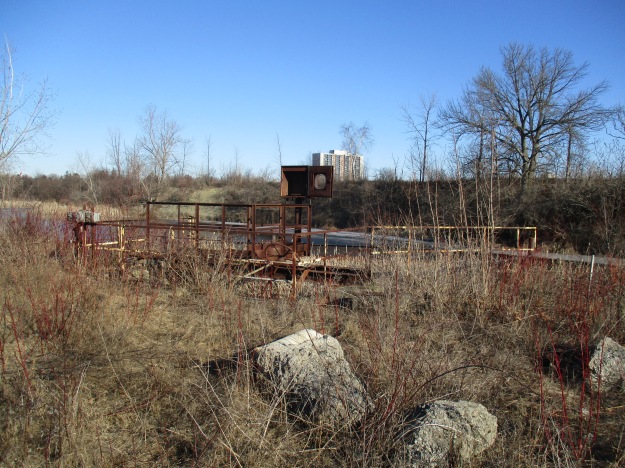 Outflow from the pond was transferred to a series of settling ponds to remove solids from the water.  From here it was carried through a concrete pipe and released into the lake. 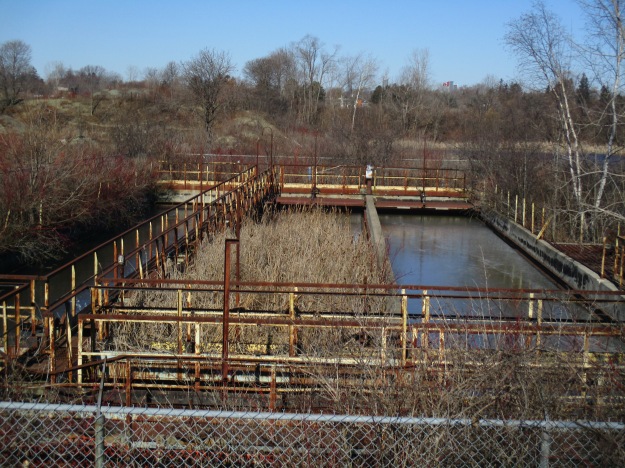 We made our way to the end of the concrete pipe that discharged the water from the pond on the Imperial Oil Lands.  The round concrete pipe has been encased in a concrete shell to protect it from the effects of the lake. 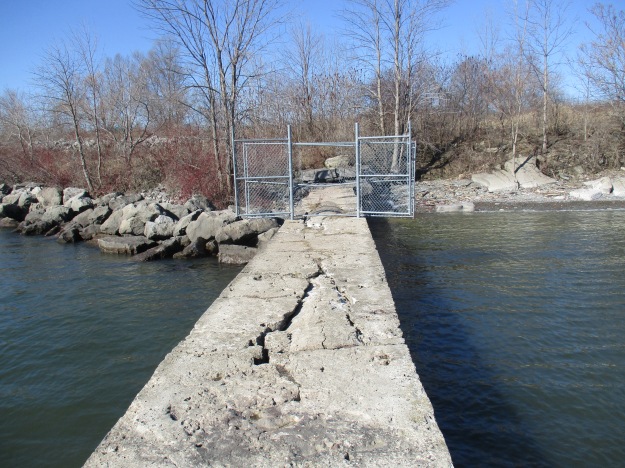 The Waterfront Trail takes the name Imperial Oil Trail as it passes along the lake side of the property.  We followed it west to where you are forced briefly to follow the road.  That wasn’t such a bad thing as we were treated to a broad-winged hawk sitting on a hydro wire.  These birds usually winter in the south and I wonder if this one was noticing the -20-celsius wind and wishing it hadn’t come back yet. 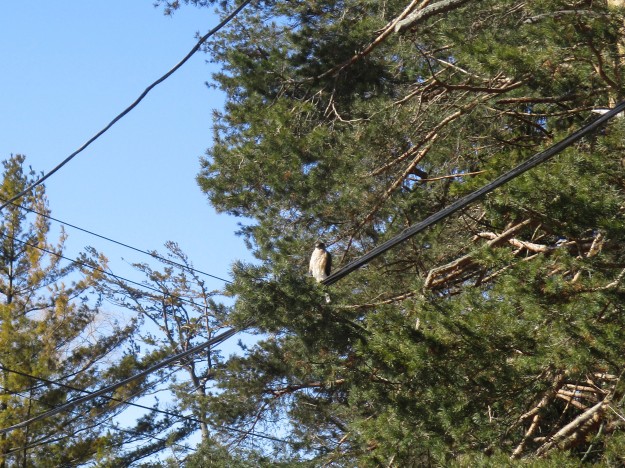 Ben Machree Park has some interesting wood carvings by Jim Menkin.  Jim has converted dead tree stumps into art with his chainsaw in many parts of Ontario including Orangeville and Mississauga.  This park features three wood carvings named “Sirens of Homer’s Odyssey”. 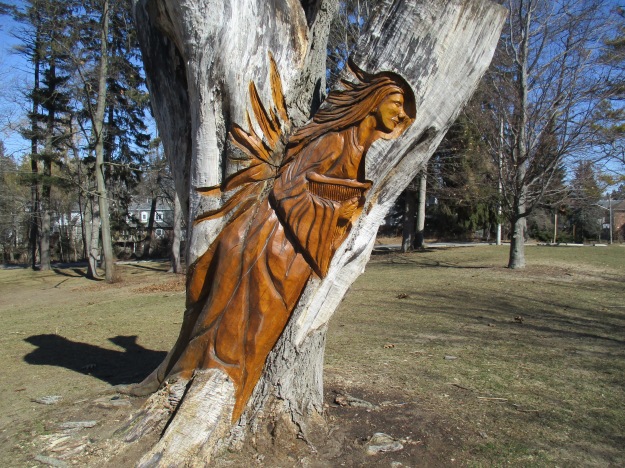 We returned along the Imperial Oil Trail east toward the mouth of the Credit River.  Just east of the concrete drainage pipe from the oil lands is a lengthy finger pier extending out into Lake Ontario.  This pier provides great views to the west looking toward Rattray Marsh.  To the east, you can see the Ridgetown with the city of Toronto in the background. The ship is partially sunk at the mouth of the Credit River to provide shelter for the marina.  Our post on the Ridgetown contains its fascinating history. 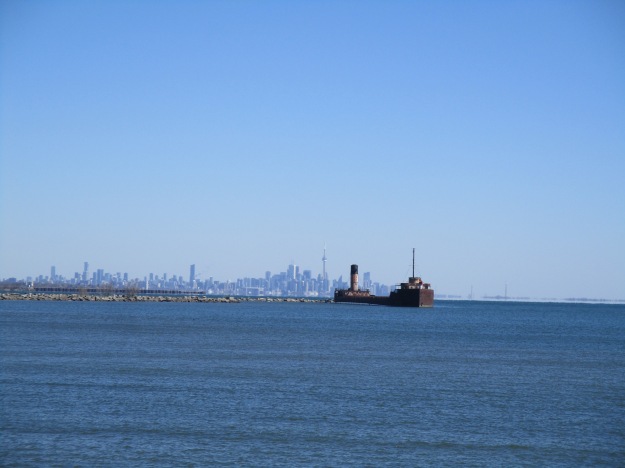 In the 1940’s Port Credit ended at Lake Street, of all places!  Today it extends out into the lake in the form of J. C. Saddington Park.  This park is built on a decommissioned dump that was in use from 1949 to 1970. A pond has been created for recreation and fishing and benches positioned around for relaxation. The pond has a thin layer of ice on it from the past two days of cold weather and a light dusting of snow.  A sliver of the moon can be seen above the trees in the middle of the picture. 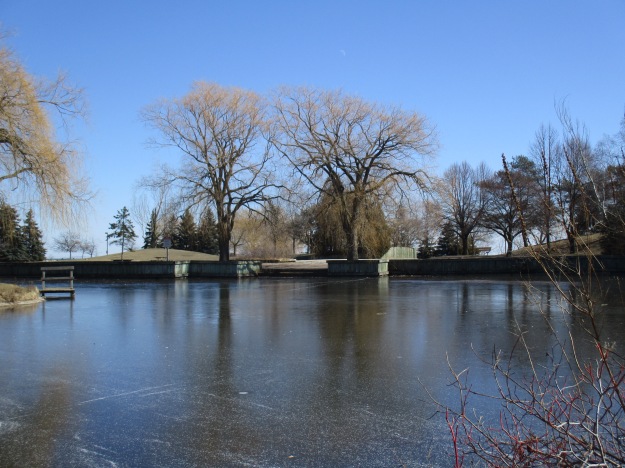 Three historic buildings stand in the corner of the parking lot. Dating from 1922 to 1923 the Port Credit Waterworks pumping station was a major advancement in the infrastructure of Port Credit. 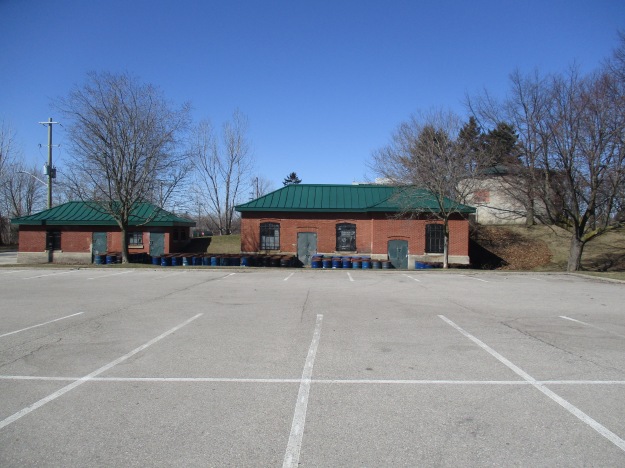 Swans, Canada Geese and several species of ducks were all to be seen in the lake today.  Of interest was the fact that they have gone back into pairs after spending the winter in groups.  Spring must be coming soon…

A 1973 Toronto Archive Aerial photo of the oil lands can be accessed here.

Our readers selected the top 15 stories for this special feature.

Rattray Marsh contains fossils that help form it, abundant wildlife and 100-year-old abandoned structures. And that’s just in the corner we explored.  We set out to enjoy the last Saturday of summer and decided to visit the Rattray Marsh.  There is very little parking at the marsh and so we parked at the Bradley Museum.

James Rattray was born in 1887 and after having served in WW1 he made a fortune in the mining industry.  He was friends with Percy and Ida Parker who owned the Riverwood Estate.  In 1945 he bought the Fudger mansion along with 148 acres including the mouth of Sheridan Creek.  The historical atlas shows that the creeks emptying into Lake Ontario along this stretch all had a marsh where they emptied into the lake.  Today, the marsh on Sheridan Creek is the only one left between Toronto and Burlington.  The rest of them have been filled in and when James Rattray died in 1959 developers started making plans to build homes on this one too. The Credit Valley Conservation bought the property in 1972 after local residents petitioned to have the marsh saved.  It was opened as Rattray Marsh Conservation Area in 1975.

The shoreline along this part of the lake is made up of flat stones that have been rounded through years of wave action.  They have been washed up on the beach in a wall known as a shingle bar.  This rock barrier slowed and sometimes stopped, the flow of Sheridan Creek into the lake.  The waters pooled behind this wall and silt settled on the bottom where aquatic plants took root forming the marsh over time.  The picture below shows the mouth of Sheridan Creek and the rock barrier, or shingles bar, that maintains the marsh. 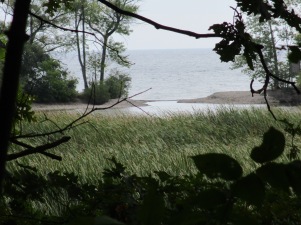 The threat to the marsh actually started long before the developers made specific plans to fill it in. Without realizing it they had already initiated a slow process that would do so.  As development occurred on properties upstream the amount of sediment in the marsh increased.  Buildings, roads, and parking lots don’t absorb water like fields and forests do. Water runs off quickly and carries soil and other dirt into the creek.  The water slows down in the marsh where this silt settles and quickly buries the natural ecosystem.  To restore the marsh some of this sediment was removed to expose the native soil and allow the seeds trapped inside to germinate.  White carp have also invaded the marsh and are disturbing the sediment on the bottom through their feeding.  This has destroyed plant life and the habitat it provided. The carp have been isolated and are now kept out by fences in the marsh like the one pictured below. 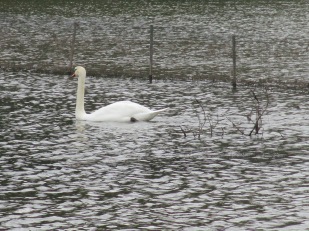 We did a little beach combing looking for interesting rocks and fossils.  The wall of shingle stones along the shoreline is full of fossils.  The remains of these long-gone creatures now serve to keep the creek out of the lake and helped the marsh to form.  There were many small stones with multiple fossils of worms in them.

Along the lake shore at the creek mouth, there is a deteriorating break wall that was installed to help preserve the marsh from erosion.  A little east of here a large concrete chamber stands looking out over Lake Ontario.  The top is broken off and several small trees are taking root inside.  This was likely built in 1918 when Fudger had the house built on the property,  He was obsessed with fire protection and built his house out of concrete.  This appears to be an old pump house, perhaps part of a fire suppression system. 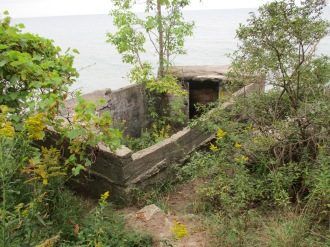 Turtlehead flowers grow in moist soil and bloom from late in August through to October. They get their name from the shape of their white, red or pink flowers which look like a turtle with its mouth open.  Turtlehead flowers have been used in traditional medicines for centuries.  They make an excellent remedy for skin sores as well as reportedly being used for birth control by some native tribes.  They are a favourite food for white tailed deer like the young male featured in the cover photo. 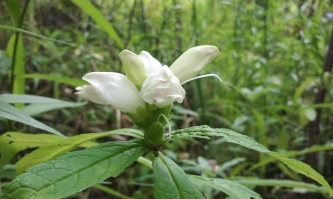 Aside from carp, Rattray Marsh has also been invaded by the emerald ash borer.  This little green insect kills 99.9% of all ash trees it comes into contact with.  Unfortunately, most of the tree cover in the marsh and surrounding area is ash.  The picture below shows trees with an orange mark on them.  These are infested with the ash borer and will be cut down and replaced with new plantings.  Trees that are not infected can be protected against the insect at a cost of about $200 per tree for an injection that must be repeated every two years.  Injected trees have a little metal tag on them. 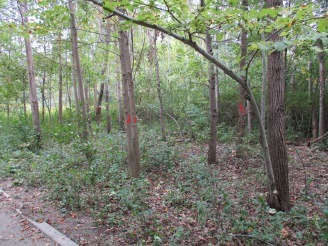 On Monday, September 11, 2017, we returned to the marsh to explore the boardwalks and see what the back half of the park holds.

The Trans Canada Trail and the Waterfront Trail pass through the 90-acre park on a common boardwalk. There is a secondary trail which is 1.8 km long and a small 0.3 km loop known as the Knoll Trail.  Credit Valley Conservation has recently completed upgrades and replacements to much of the boardwalk around Sheridan Creek and they reopened on September 2, 2017. 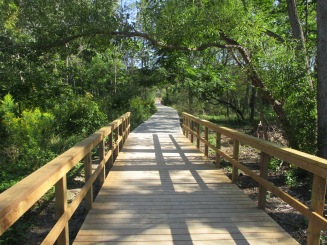 Rattray Marsh was rather low on water and we could see where it had been several feet deeper recently. 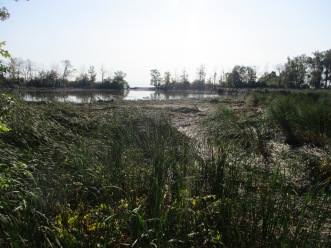