There are estimates that over 6,000 ships have sunk in the Great Lakes.  Lake Ontario seems pretty calm but it has claimed over 200 ships since the arrival of Europeans.  One of those lies near the shore at the foot of the Scarborough Bluffs.  As it is the only one that can be easily located, it makes a great place to connect with a piece of our local history.

There weren’t very many birds out on this day but I did see a couple of  red-tailed hawks. One of them was hunting along the edge of the bluffs, riding the wind as it looked for food. 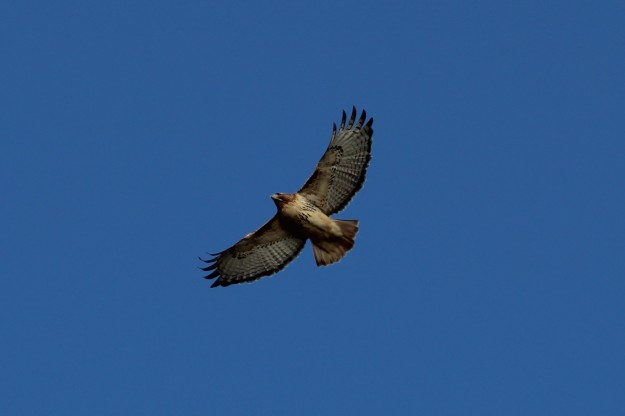 The Doris McCarthy Trail runs from free parking on Ravine Drive down to Lake Ontario.  It descends about 90 metres over a length of 900 metres, making it a fairly steep trail.  The trail runs through a ravine known as Gates Gully which has a number of historical features, including the allure of buried treasure.  The trail gives great views of the lake as you make your approach to the beach.

Sections of the beach trail can be pretty muddy but I think that is preferable to a shingle beach of eroded bricks.

The Alexandria was a steamer built in Hull, Quebec in 1866.  The 508 ton vessel was over 170 feet long and 30 feet wide.  It was built as a freighter and later had passenger decks added in Montreal.  It worked the route along the north shore of Lake Ontario, occasionally making trips to Rochester, New York.  On this fateful night the ship was carrying 300 tons of sugar, beans, vinegar and tomatoes.

On the afternoon of August 3rd, 1915 there was a storm raging with heavy winds blowing along the shore of the lake.  The steamer was blown closer and closer to the Scarborough Bluffs until it ran aground 200 yards from shore and began to sink.  Her crew of 22 was rescued and led to safety up Gates Gully.   The remains of the Alexandria are rusting badly and you can now see through several layers of metal near the waterline.  Eventually the parts of the ship that remain above water will rust away and slip into the lake leaving little trace of the majestic ship that lies below.

For the next two days souvenir hunters scoured the beach carrying away anything that could be put to use.  Many people were able to fill up their pantry with food from the wreck.  Due to the extreme damage the ship had taken it was decided that there was no point in doing any kind of salvage work.   There is a lot of ship still below the waterline and in the 1930’s it was very popular to go diving around the wreck looking for artifacts. 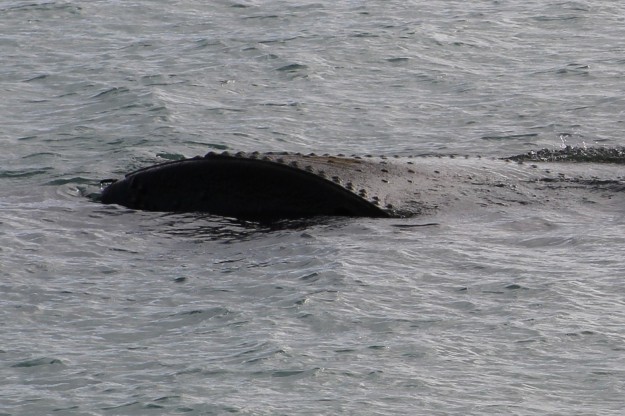 Waterbirds are common along the shore of the lake.  Mallards and Canada Geese can be seen on almost every visit.  Sometimes you get to see some of the less common ducks and there was a trio of long-tailed ducks swimming near the sunken steamer. 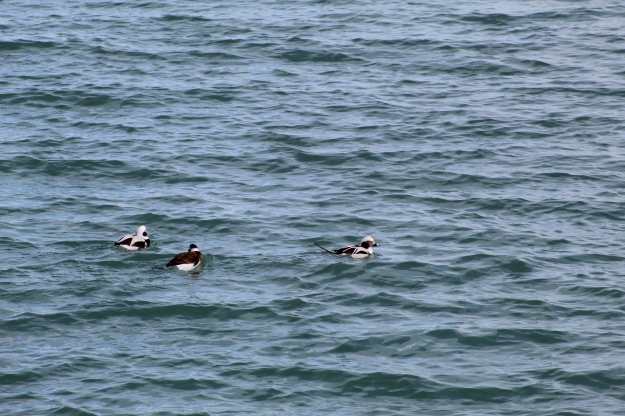 This section of the bluffs is continuing to erode and the shore line has not been completely modified with armour stone.  This is one of the few remaining “natural” sections of the bluffs and we hope that current plans to modify it don’t come to pass.  Near the top of the bluffs a sign warning people to keep back from the edge because it isn’t stable, has itself fallen over the edge. 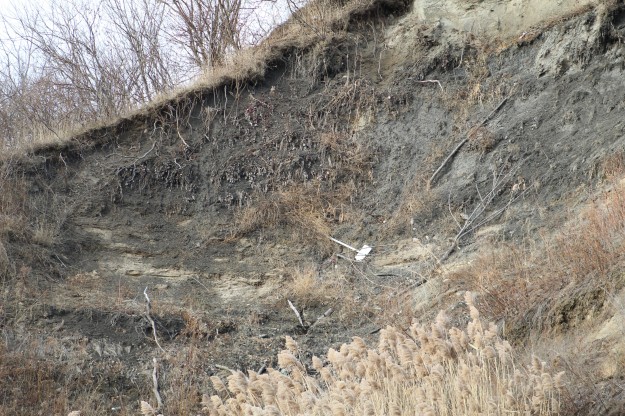 The sky looked like our neighbours on the south side of the lake might not be having quite as nice of a day as we were. 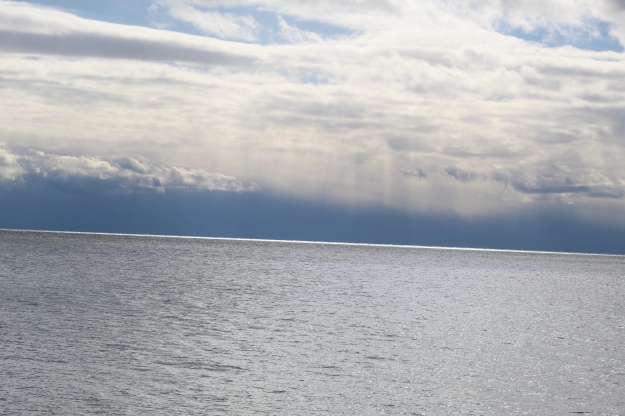 The view along the side of the bluffs is always interesting and ever changing.  It makes it worth returning time and again.

The thing about visiting a site at the bottom of a hill is the certainty that you will have to climb back up.  With the slippery footing this was an interesting challenge.  In the summer this trail is a great place to jog or bike uphill to increase your stamina. 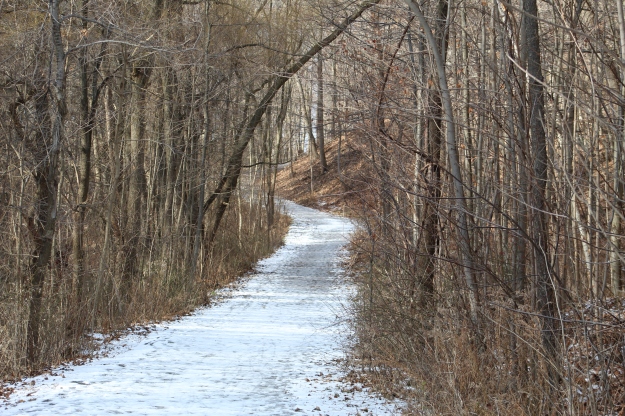 The Scarborough Bluffs are a unique geological feature that we get to enjoy in the GTA and one of my favourite places to pass a few hours and enjoy being outside.

Gates Gully runs from Kingston Road to Lake Ontario and provides one of the few places where there is access down the side of the Scarborough Bluffs.  Over the years it has been home to natives, smugglers, soldiers and rebels.  The Bellamy Ravine Creek flows through the bottom of the ravine where it makes a 90 meter drop from the table lands to the lake. The picture below shows the ravine where it starts at Kingston Road.  The ravine provided a gentle enough grade to bring goods from the lake shore up to Kingston Road via carts and so a community developed at this point.  Jonathan Gates built an tavern and the ravine became known as Gates Gully.

The Scarborough Bluffs were exposed when Glacial Lake Iroquois suddenly drained about 12,200 years ago.  The change in climate caused the natives to modify their hunting and gathering practices and new tools were invented.  Scientists call this period the Archaic Period and the early portion ran from 10,000 to 8,000 years ago.  Artifacts have been found in the ravine from this time period indicating that the natives were using it as an access to the lake shortly after the end of the ice age.  The ravine has changed a lot over the years from both land filling and erosion.  The west side of the ravine has a set of stairs that used to lead to the ravine floor but now the steps slant at an odd angle and then end in loose sand and mud hiding under a layer of dead leaves. 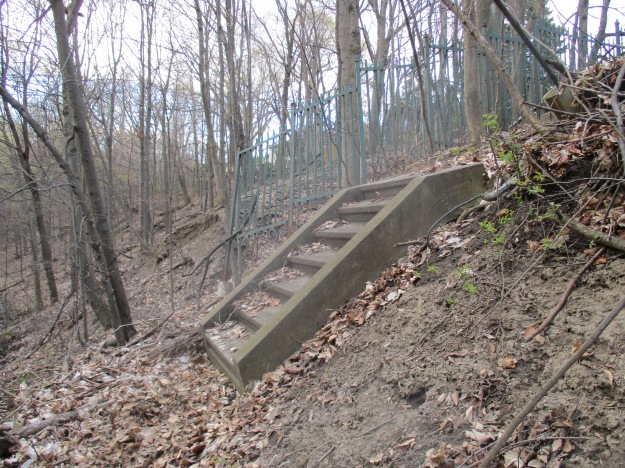 On April 27, 1813 the Americans attacked Fort York and captured it from the British.  When General Sheaffe determined that the Battle of York was lost he ordered the army to retreat to Kingston, which they did, using Kingston Road.  Legend has it that some of the soldiers hid the money they were carrying in the gully.  Treasure hunters have been seeking it for the past two hundred years and if it ever existed, it is apparently still there.  One of the beautiful things about spring time is the fact that there are new flowers in the woods almost every day.  The Scilla provides a splash of blue to the forest floor but is not native. 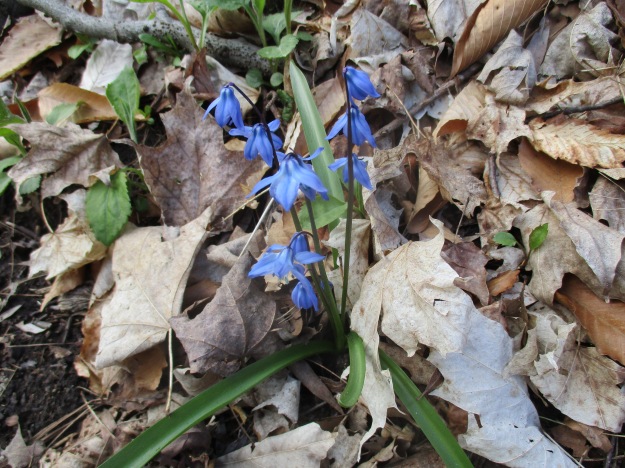 The ravine is a migratory route for over 100 species of birds.  The woods were alive with the sounds of bird calls on this sunny morning.  The wetlands are now under the protection of the male red-winged blackbirds.  They have started their usual tactics of swooping near your head to let you know that you are too close to the nest.  Bright red male cardinals were everywhere singing their songs to attract the less colourful females.  The picture below shows a female cardinal who was playing hard to get with a couple of males. 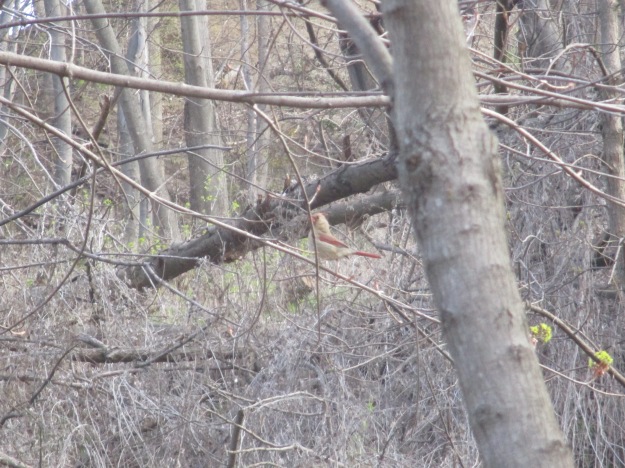 Smugglers found it easy to bring goods from the United States into Canada through Gates Gully.  This practice was prominent in the 1830’s as merchants sought to avoid paying import taxes.  Gates Tavern became famous for the part it played in the Rebellion of 1837. When William Lyon McKenzie started to rally his rebel forces at Montomery’s Tavern on the night of Dec. 5, 1837 the Scarborough militia started to gather at Gates Tavern. Ironically, it is said that McKenzie hid for awhile at the Annis home, one of the first settlers in the area of Gates Gully and the property just to the east.  On August 3, 1915 the steamship Alexandria was wrecked near the entrance to the gully.  The Alexandria was built in 1866 and served both as a passenger ship and a cargo ship.  On this night it was bringing 300 tons of beans and tomatoes when it was blown too close to the shore and was grounded.  All passengers were brought to safety and led up the bluffs through Gates Gully.  The hull of the steam remains in the lake 100 years later, just to the east of the gully.  The archive picture below shows the wrecked ship. 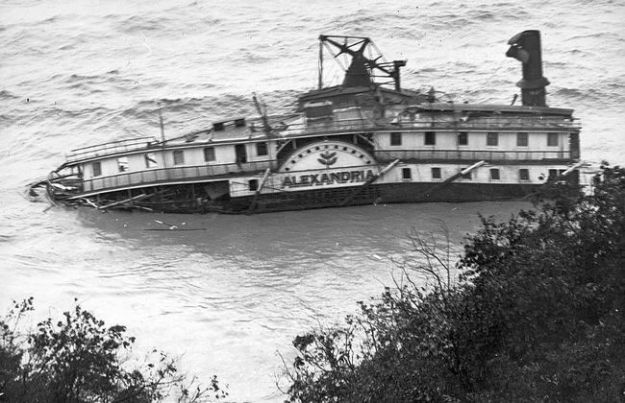 As you reach the bottom of the ravine you find a steel sculpture named Passage. Designed to look like the rib cage of both a fish and a canoe, it commemorates one of the first people who took up residence on the edge of the bluffs.  In 1939 Doris McCarthy purchased 12 acres on the top of the bluffs on the west side of Gates Gully.  Doris became a famous Canadian painter and her mother dubbed her home on the ravine as Fool’s Paradise because she thought the purchase was too extravagant. 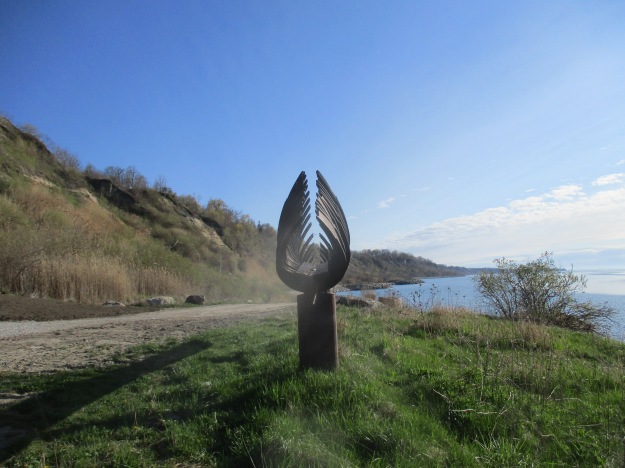 Fools Paradise stands on top of the bluffs, just out of site in this picture.  To commemorate the life and work of Doris McCarthy the trail through Gates Gully has been named after her. 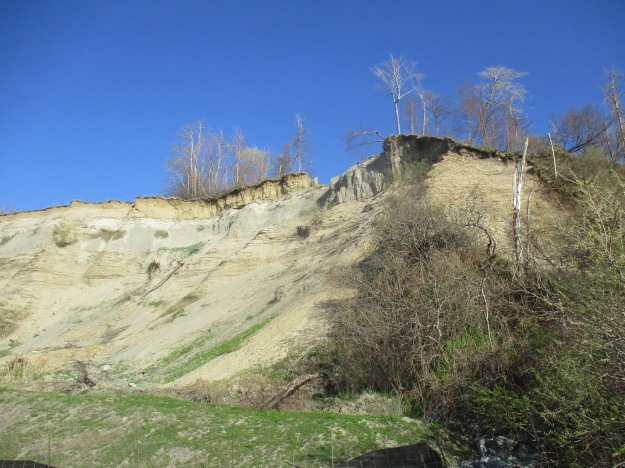 Following Doris McCarthy’s lead, other people came to settle on the top of the bluffs.  The section of bluffs to the west of Gates Gully are on the former McCowan estate, after whom McCowan Road is named.  The bluffs are eroding every year and many homes that were built too close to the edge have already fallen over.  The picture below, and the cover photo, show a home that has been slowly being torn apart as the sand disappears from beneath it.  The sand embankment below the former house is now filled with wood scraps, doors and tiles. 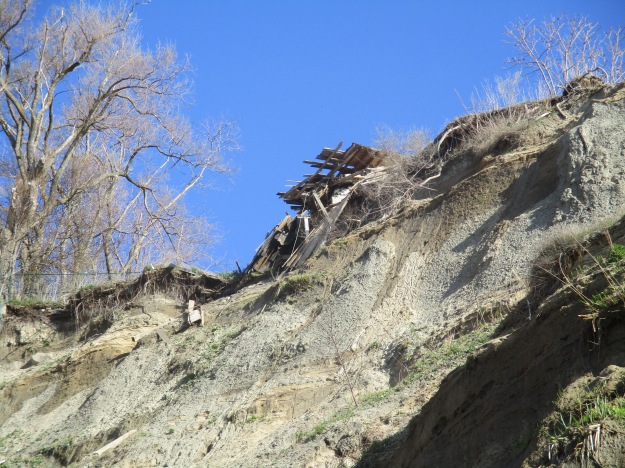 The image below from Google Earth was taken on May 22, 2015 and the house can be seen near the red arrow.  It appears that about half of the house was standing a year ago, but there isn’t very much left any more.

In 1986 it was decided to initiate erosion control in Gates Gully and along the beach.  The shore was lined with stone and break waters were built extending into the lake in a manner similar to the Leslie Street Spit.  The photo below was taken from the end of one of these erosion control forms.

This downy woodpecker was one of several that was looking for lunch in Sylvan Park.  It prefers beetles and ants but will eat suet at back yard feeders as well.

Meadowcliffe Drive on the top of the bluffs leads to the site of Fool’s Paradise.  It is on private property but a historic marker is placed on the end of the driveway.