York Region has many small communities that have shrunk from their late 1800s sizes and faded almost into oblivion. They have lost their industry, blacksmiths and hotels and usually their stores as well. We refer to these as ghost towns although in the strictest sense they aren’t really. This blog collects 7 of the ones that we have visited and arranges them in alphabetical order. Each has a picture that represents the community as well as a brief description. The link for each will take you to a feature article on the community which has the local history as well as pictures of any surviving architectural features. At the end of each feature article is a google maps link in case you should wish to explore for yourself someday. Future companion blogs in this series will cover the ghost towns of the Peel Region, Halton Region, and the City of Toronto.

Cedar Grove still has it’s historic school and Lapp’s Cider Mill but the real treasure is Cedarena. The skating rink operated from 1927 until 2015 and now it sits waiting for skaters who never show up.

Elders Mills formed around a crossroad and thrived for a couple of decades before it went into decline. Several of the original houses and the 1872 school house still remain. A couple of the houses as well as the school have been incorporated into new structures which has saved them from demolition. The homes on the farms around the town have been removed as the land has been cleared for housing.

The former community of Laskay has declined considerably and now the old Methodist Church is a home. A few historic buildings still line the street but the best preserved of all is the old Laskay Emporium which serves as an fine example of a country store and post office at Black Creek Pioneer village. Filled with period merchandise it is a real blast from the past.

Maple has grown into a larger community but there’s still lots of older homes and the historic train station to remind us of the small town that started in the early 1800s. There’s also this amazing log home built with massive timbers that hides in a woodlot on the edge of town.

Ringwood has a lot of abandoned buildings including this 1887 school house which has some interesting wood paneling on the front. At that time, the population was 300 but began declining almost right away until within a few decades there were only 13 students in the school.

Sherwood was larger than Maple at one point but quickly faded into a couple of churches and a few homes. Most of these have since been demolished in order to build a large train switching facility. The Zion Evangelical Church still holds services and has an extensive pioneer cemetery.

Every Ghost Town has its pioneer cemetery where you can check out the old grave markers and remember the people who lived there a couple of hundred years ago. Some even have markers or cairns for Indigenous Peoples who lived here centuries ago and are buried within the community. Teston has both types of burial grounds but neither is well marked and even the pioneer head stones are missing.

Compared to Toronto and some of the other surrounding areas, York Region has still got quite a bit of its pioneer heritage in place.

George Fockler bought 200 acres of land at the intersection of the Markham-Stouffville Townline (Stouffville Road) and the 8th concession (Highway 48, Markham Road) and moved his family from Pennsylvania in the late 1790’s.  George owned the northwest corner of the intersection and later his son Sam bought the north east corner lot and built a hotel there.  Revere House opened in 1809 and stood until 1957 when it was demolished to allow for road widening.  The original crown survey created a system of road allowances that were 1 chain (66 feet) wide and this was suitable for the horse and buggy system that was in place at the time.  Stores and hotels were often built close to the road and countless numbers of these structures have disappeared across Ontario as roads get widened to four lanes.  This late Victorian house is for sale and looks like it wouldn’t take too much to fix it up and make it livable again.

Ludwig Wideman arrived in Ringwood along with his parents in 1805.  Thirty years later when William Lyon Mackenzie was fomenting rebellion, the area of Whitchurch Stouffville was firmly on Mackenzie’s side.  Ludwig joined up with the rebels at Montgomery’s Tavern and became one of the casualties there when the rebellion failed on Dec. 7, 1837.  The picture below shows one of a dozen abandoned homes in the former core of Ringwood. 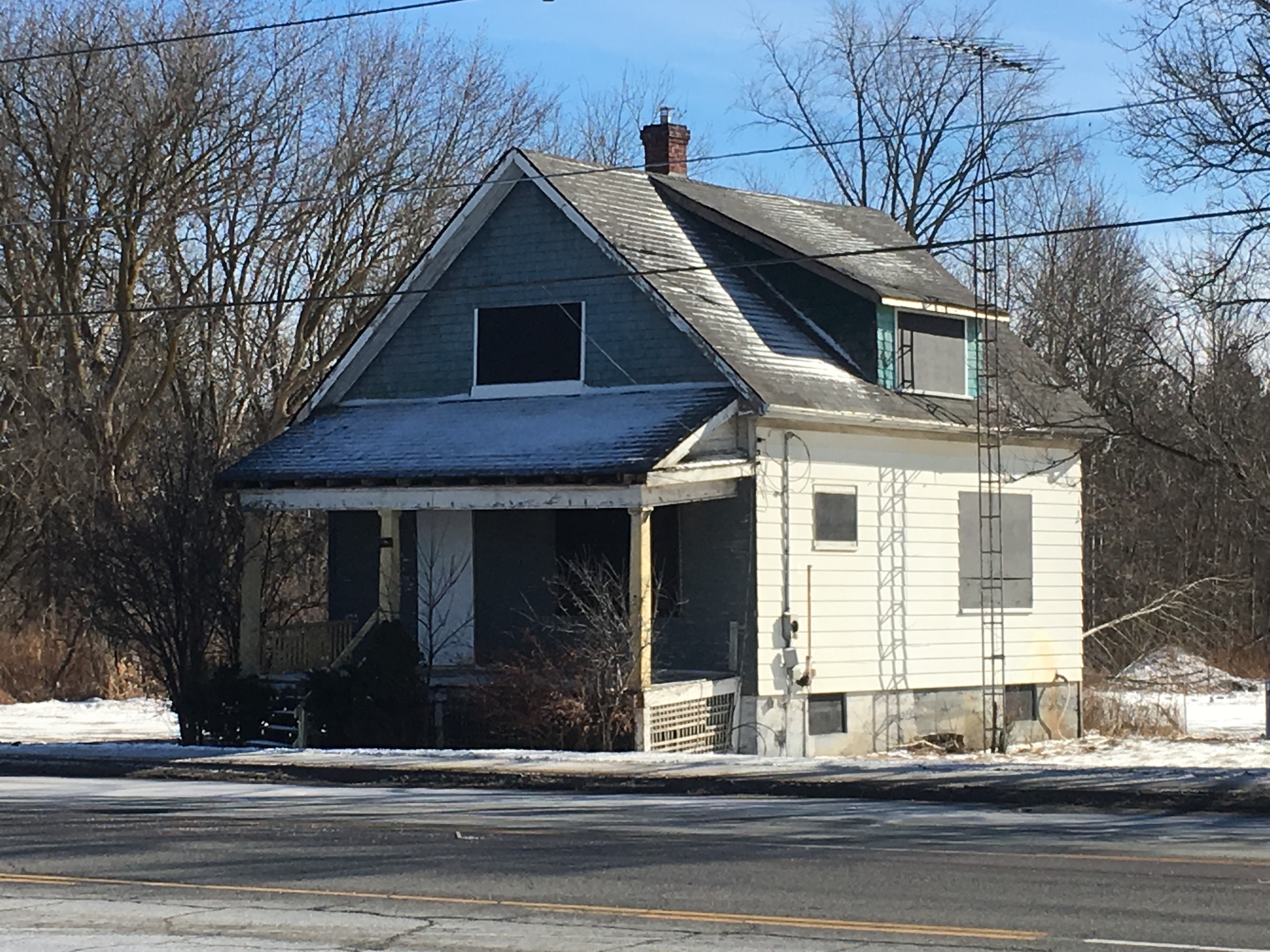 George Sylvester came from Ringwood, England to the growing community and opened a general store on the north west corner of the intersection.  In 1856 the new post office in town was located in his general store and he named the town Ringwood after his hometown.  The name stuck but the residents took to calling the town Circle City in jest.  The post office survived until 1970 when the population had decreased to just 40 and it was replaced with mail boxes, one of which stands where the Revere House used to be.

According to the Annual Report of the Bureau of Industries for the Province of Ontario, A. B. Grove operated a cheese factory in town in the early 1890’s, one of two at the time.  A Chevrolet dealership was established in town by 1928 and was run by the McKenzie family and employed 7 people.    This barn still stands in what was once downtown Ringwood and would have been behind the Revere House Hotel, before it was demolished.  It may have served as stables at one time.

The Lehman house was built around 1870 and there is most likely is a patterned brick house hiding behind the veneer of siding that was been added at a later date.

At the peak, Ringwood had two of many of the standard small town professionals, 2 hotels as well as two general stores, shoe shops, carriage makers, cheese makers, sawmills and blacksmiths.  By the 1850’s a plank road had been built between Stouffville and Richmond Hill and it was served by a stagecoach that would stop at Ringwood to take on passengers.  This sprawling Victorian house once stood among these vanished businesses on the main street of town. 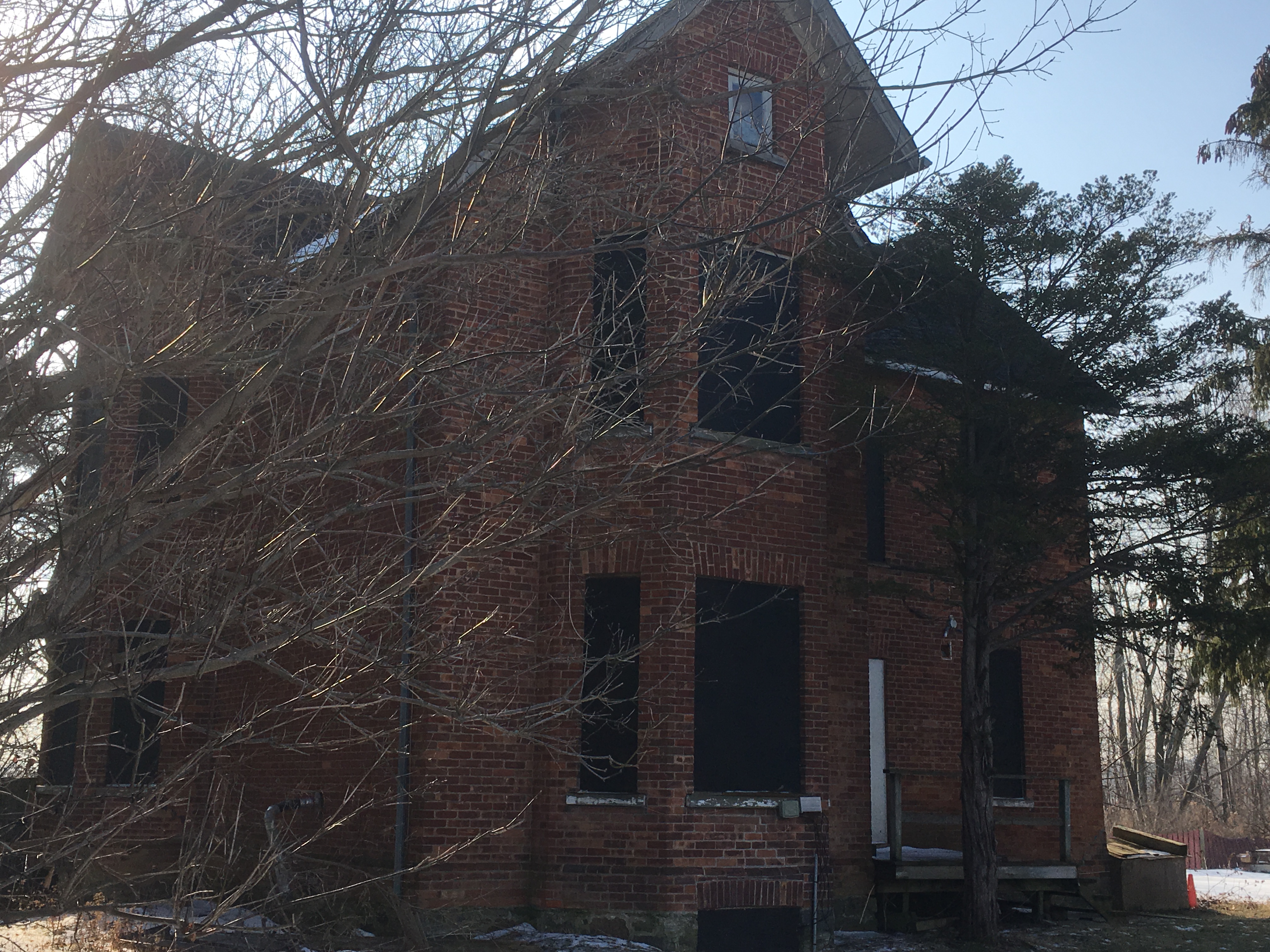 One of the last businesses to close in Ringwood was the diner.  It is reported to have become a biker hangout in the last days of operation.  It stands at the corner of Markham Road and Stouffville Road, which used to have a slight jog in it.  This was where the surveys in the two townships on either side of the road didn’t quite align and an adjustment was made.  When the roadway was widened and straightened in 1957 one of the hotels, a harness shop, several homes and two garages were demolished.

The one room Ringwood school was built in 1838 and was known as a union school section because it served students from two townships.  This is because Ringwood sat on both sides of the town line.  As the town grew the school became too small and was replaced with this dichromate brick building in 1887.  The town population had swelled to 300 by this time.  Twenty years later there were less than 200 people in town and by 1939 there were just 13 students enrolled in the school.  That was the year that the school trustees voted against installing electric lights or hiring a dedicated music teacher.  The $1200 salary for the one teacher was already more than the budget would allow.  The school closed in 1971 and then was used by the Bethel Pentecostal Assembly as a church building.  Today it sits empty with an unknown future. 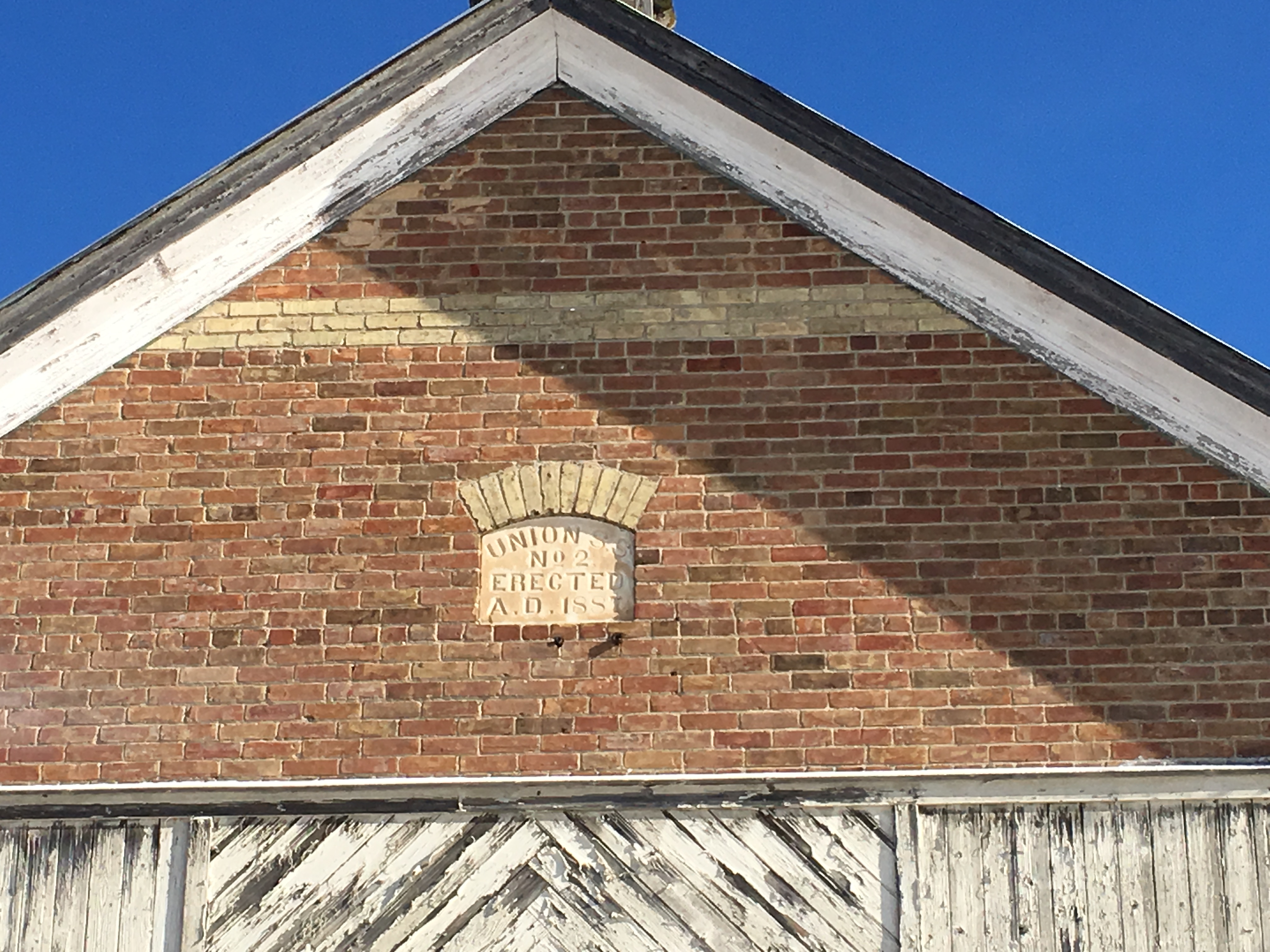 With the arrival of the Toronto and Nippising Railway and also the Lake Simcoe Junction Railway in Stouffville, the decline of Ringwood began.  The railway provided access to markets and the businesses of Ringwood packed up and moved down the road.  The picture below shows the view looking from the main intersection into Ringwood where the once bustling main street now has only a few boarded up houses.

West of the main intersection a strip of original Ringwood remains in use, although there is a development sign here too.    The Christian Church was built in 1868 but has recently been converted into an interesting looking residence.  This lovely little 1860’s house should be preserved, in my opinion, along with several others that are still inhabited, but endangered by the Ringwood Secondary Plan.  It calls for mixed use commercial / residential in this area. 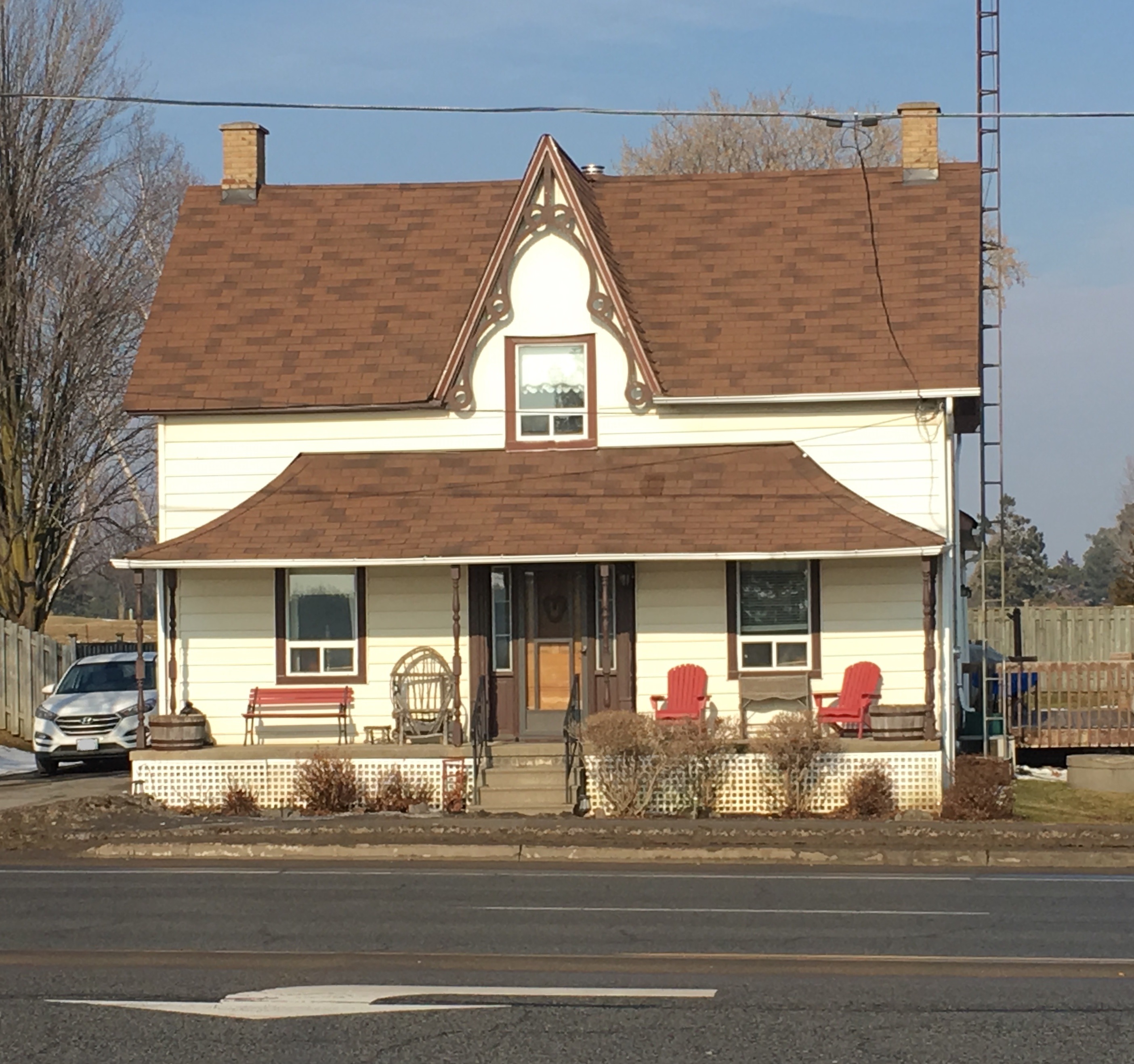 There is a new master plan for the redevelopment of Ringwood that will likely see the removal of most of the buildings in this post within the next two years.  I’m glad I got to visit before this happens.