Taylor-Massey Creek is one of the most significant tributaries of The Don River.  It joins the river near the Forks of the Don and was at one time known as the East Don River and today’s East Don was then known as Middle Don.  The county atlas below shows the extent that the Taylor family controlled the lands around the Don River and Taylor-Massey Creek.  They had a huge share in the early paper industry in York (Toronto) as they had opened the first paper mill in the city at Todmorden.  They eventually owned three paper mills with the upper mill being at the Forks of the Don.  The Taylors also formed the Don Valley Brick Works and were among the leading early 19th century industrialists in the city.  By 1877 most of the original forest cover had been removed but Warden Woods (circled in green) remained with Taylor-Massey Creek flowing through it.  As a point of interest, looking at the property owners on the left side of the map reveals the origin of the name “Leaside”. 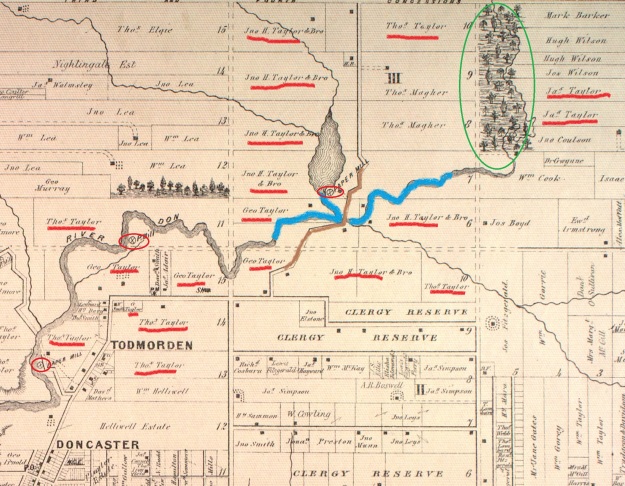 Taylor-Massey Creek joins the Don River just west of the old Don Mills Road.  This morning the ice was just forming on the confluence of the creek and river.  There is free parking in the Taylor Creek parking lot.  From the lot, we made the short trek back to the mouth of the creek before setting out to explore the unmaintained trail on the west side of the creek.  The Taylor Creek Trail forms a maintained path that runs for 3.5 kilometres along the creek. 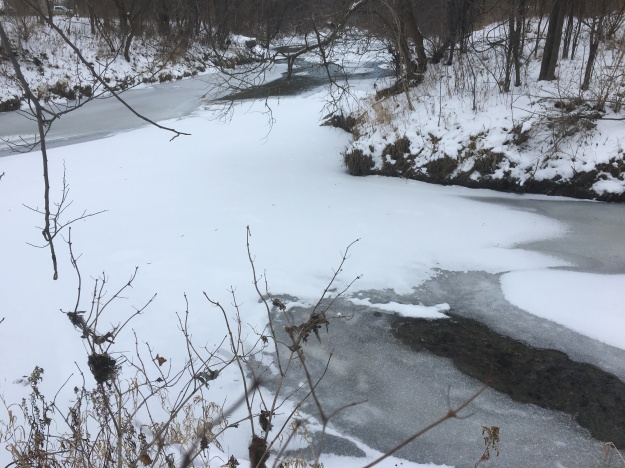 Old Don Mills Road is still used as a recreational trail and cars still cross the concrete bowstring bridge which was built in 1921.  The county atlas above shows the road in brown and a previous bridge to this one.  By 1877 it is possible the road was already using a second bridge to facilitate the traffic the paper mill brought.  The road was also the only concession that had been opened and all north-south traffic had to use this crossing. 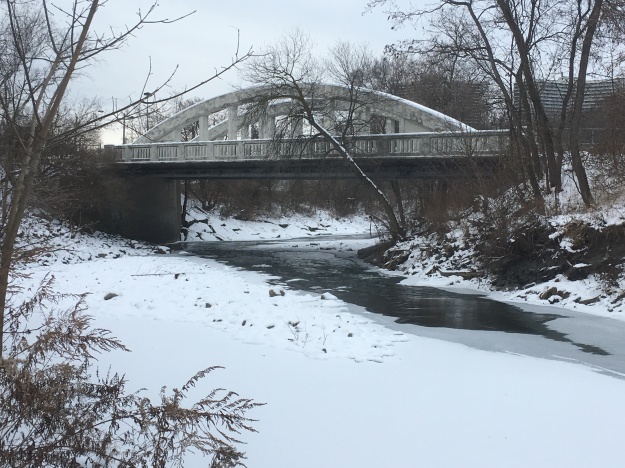 Also, near the parking lot are the elevated wetlands.  From this angle the structures look like they are walking along, following each other.  These sculptures turn art into habitat as they each contain a wetland, complete with all the wildlife they support, mostly birds and flying insects.  The water from the Don River is pumped into the wetlands by solar pumps and filtered through the wetland to be returned to the river cleaner than it began.  Each wetland features small ponds, a couple of small trees and wetland grasses. 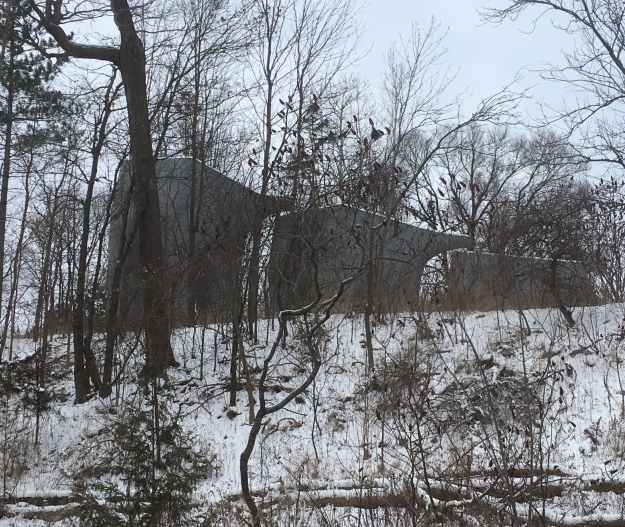 In 1994 the creek was assessed as the most degraded of the main tributaries in the Don Watershed.  The Underwriter’s Reach still shows many of the concrete channels that the creek was forced into when surrounding lands were developed for housing.  The Task Force To Bring Back The Don and other groups have put together a 40 step plan that includes restoring this watershed.  Some of this is discussed in our feature on Terraview and Willowfield Gardens Parks which showcase some impressive restoration projects.  In the picture below you can see the roadway that passes through the creek in the park. 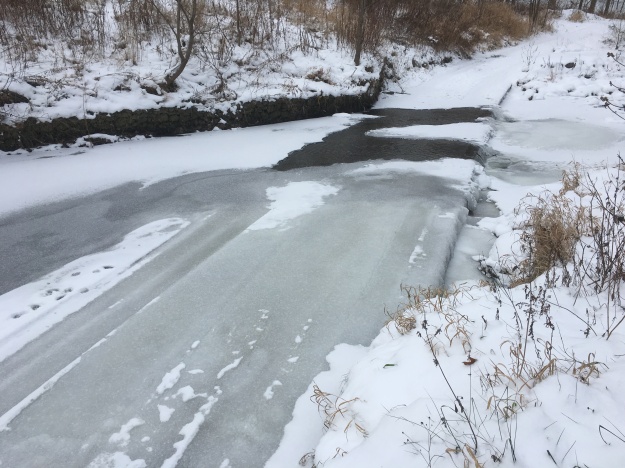 Stairways jig-jag up and down the sides of the ravine to provide access to the park from the communities on the tablelands.  The sets of steps tend to be 100-120 in length and provide good cardio workouts for those so inclined. 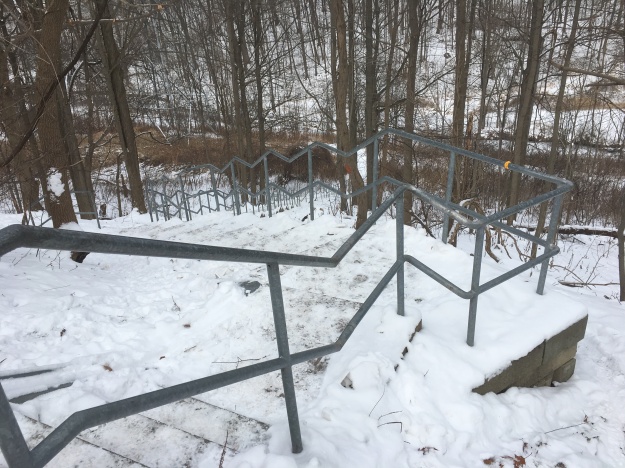 The Musqueam people lived near the mouth of the Frazer River in British Columbia.  They were very accomplished weavers and their cultural heritage has been incorporated into paintings of five benches in Taylor Creek Park.  The benches were designed and painted by members of STEPS who as an organization attempt to revitalize public spaces and connect communities.  The final designs on the five benches incorporate elements from Musquean, Ojibwa from Southern Ontario, Northern Oaxacan (Southern Mexican), and South Asian culture.  There is other artwork in the park that includes a spiral mural in the parking lot that we couldn’t see due to snow cover. 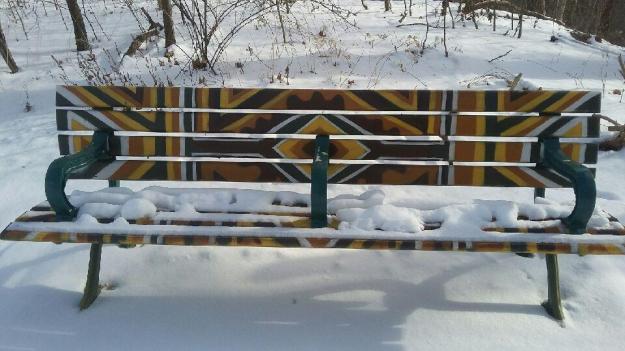 The benches were painted as part of the celebrations for the Pan Am games that were held in Toronto in July of 2015.  Also created for those games was the Pan Am Path which runs for over 80 kilometres through the city.  On one end it connects Clairville Dam and on the other Rouge Beach Park.  There is a second branch that runs to Centennial Park in Etobicoke.  The Alder Stairs are one of the connection points on the Path and the bench featured above is found at the top of these stairs. 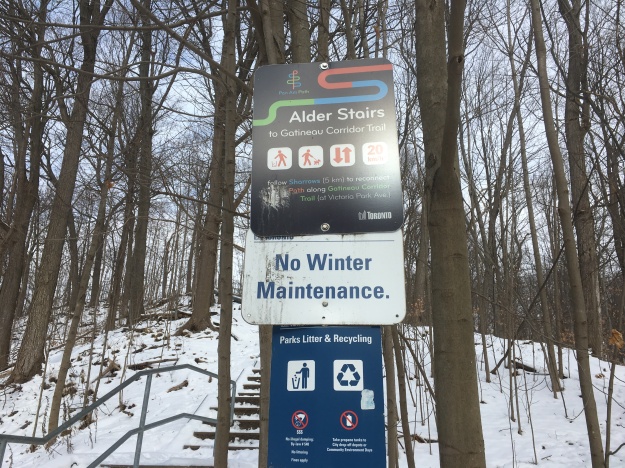 The ravine formed by Taylor-Massey Creek is cut through the side by another ravine that is separated from the trail by a wetland.  The ravine in the centre of the picture runs up the north side of Glenwood Crescent. 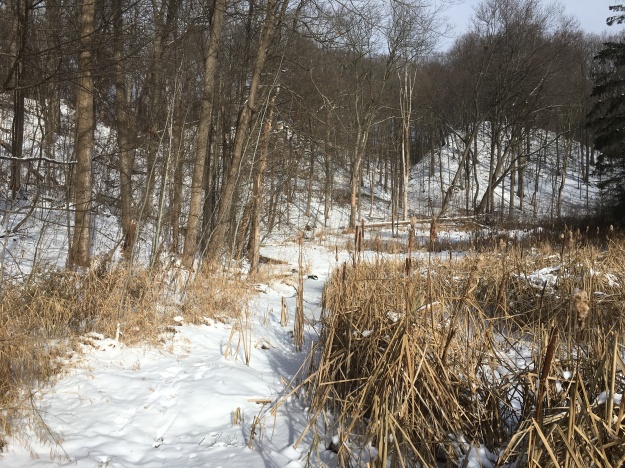 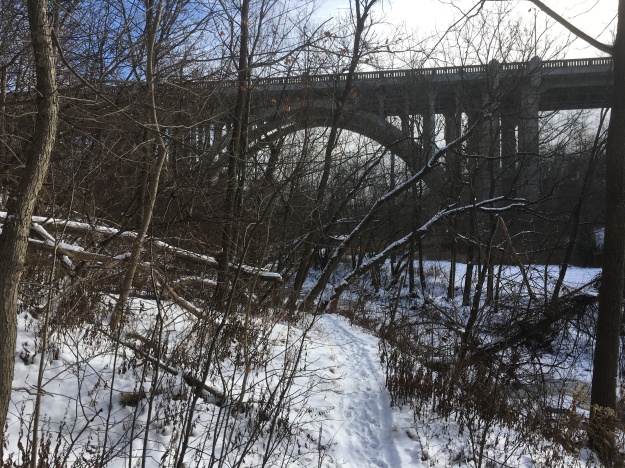 Having made our way up the less travelled side of the creek we crossed back to the paved trail. 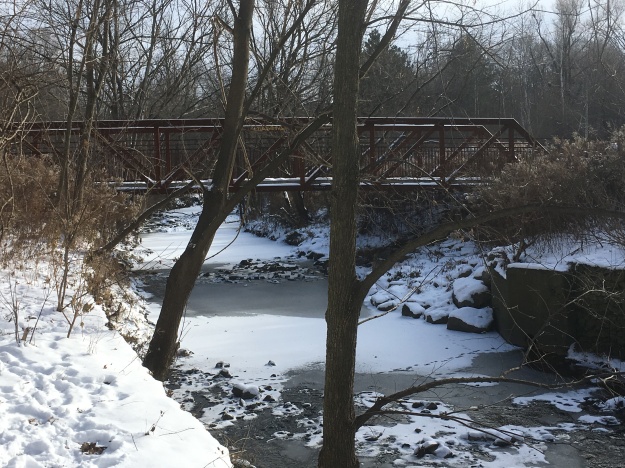 Taylor Creek Trail continues past this point but we left it for another day.  That part of the trail continues onto a property owned by the Massey family hat operated a huge farm equipment manufacturing plant in Toronto and lends their name to the creek along with the Taylor family.  There is an old mansion waiting at the other end of the trail.